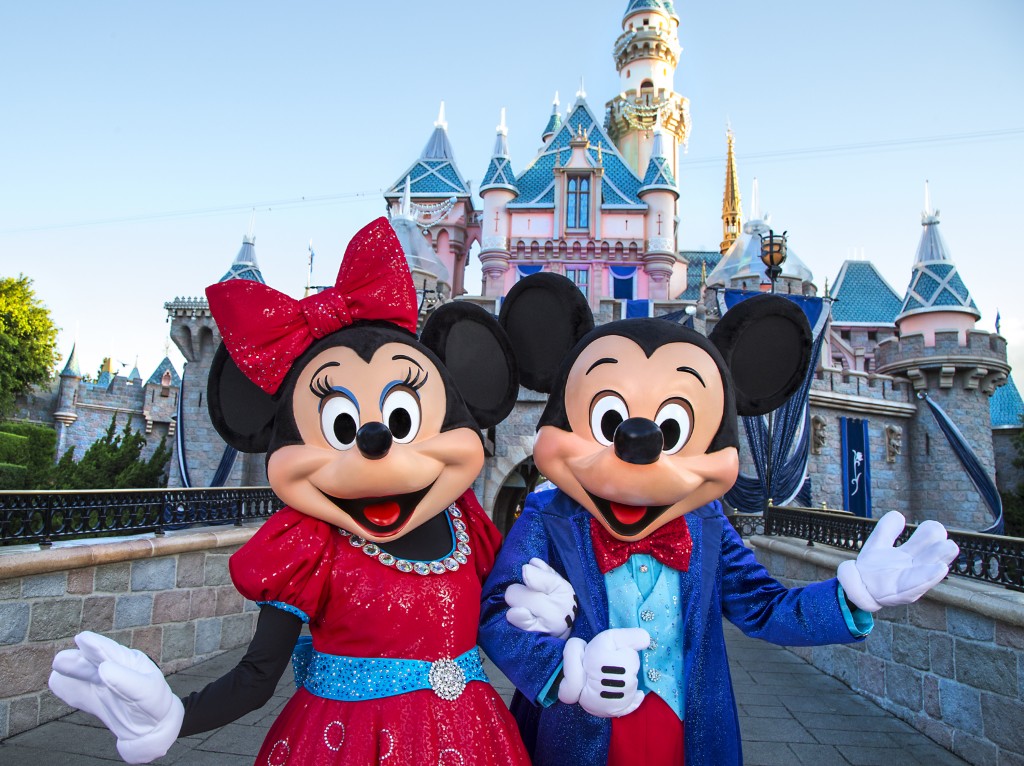 Can you believe it’s been 60 years since the Happiest Place on Earth first opened its magical gates? We were recently invited to share in Disneyland’s Diamond Celebration, including a special sneak peek at three all-new nighttime spectaculars. Come celebrate! 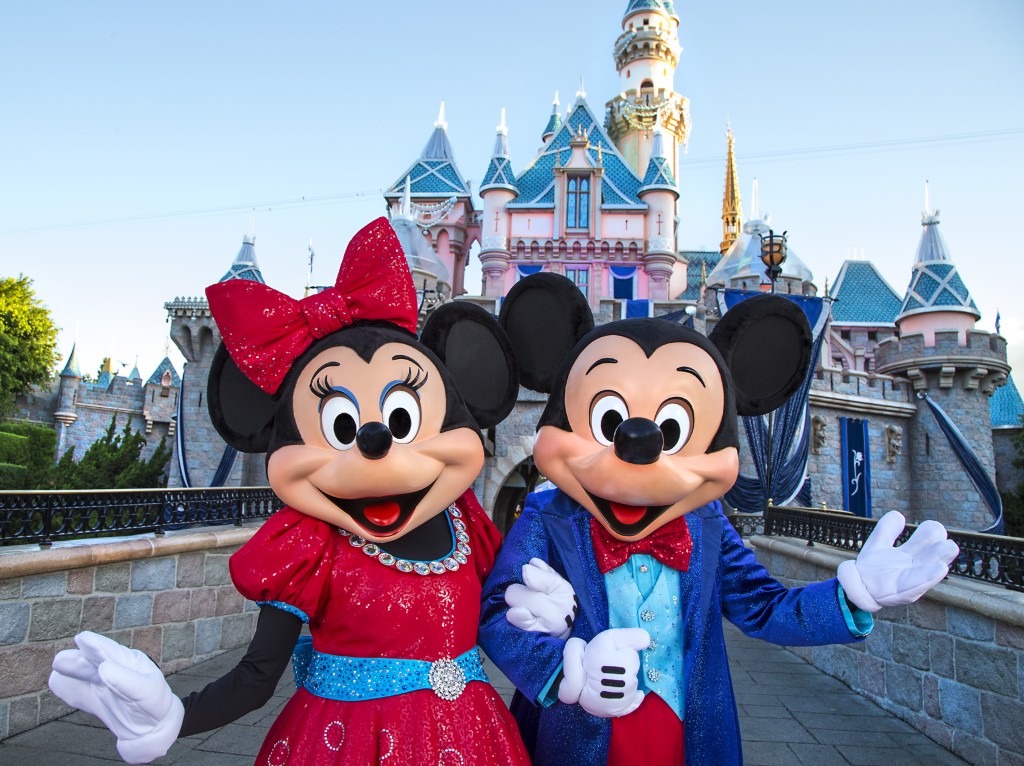 Disneyland is all decked out for their 60th celebration. Mickey and Minnie have new sparkly outfits and there are special decorations and souvenirs throughout the park. But the real party starts when the sun sets! At our sneak preview, Disneyland debuted three newly updated nighttime shows: World of Color – Celebrate! Water and Light Show, Paint the Night Electric Parade and Disneyland Forever Fireworks Show. Check them out with us! 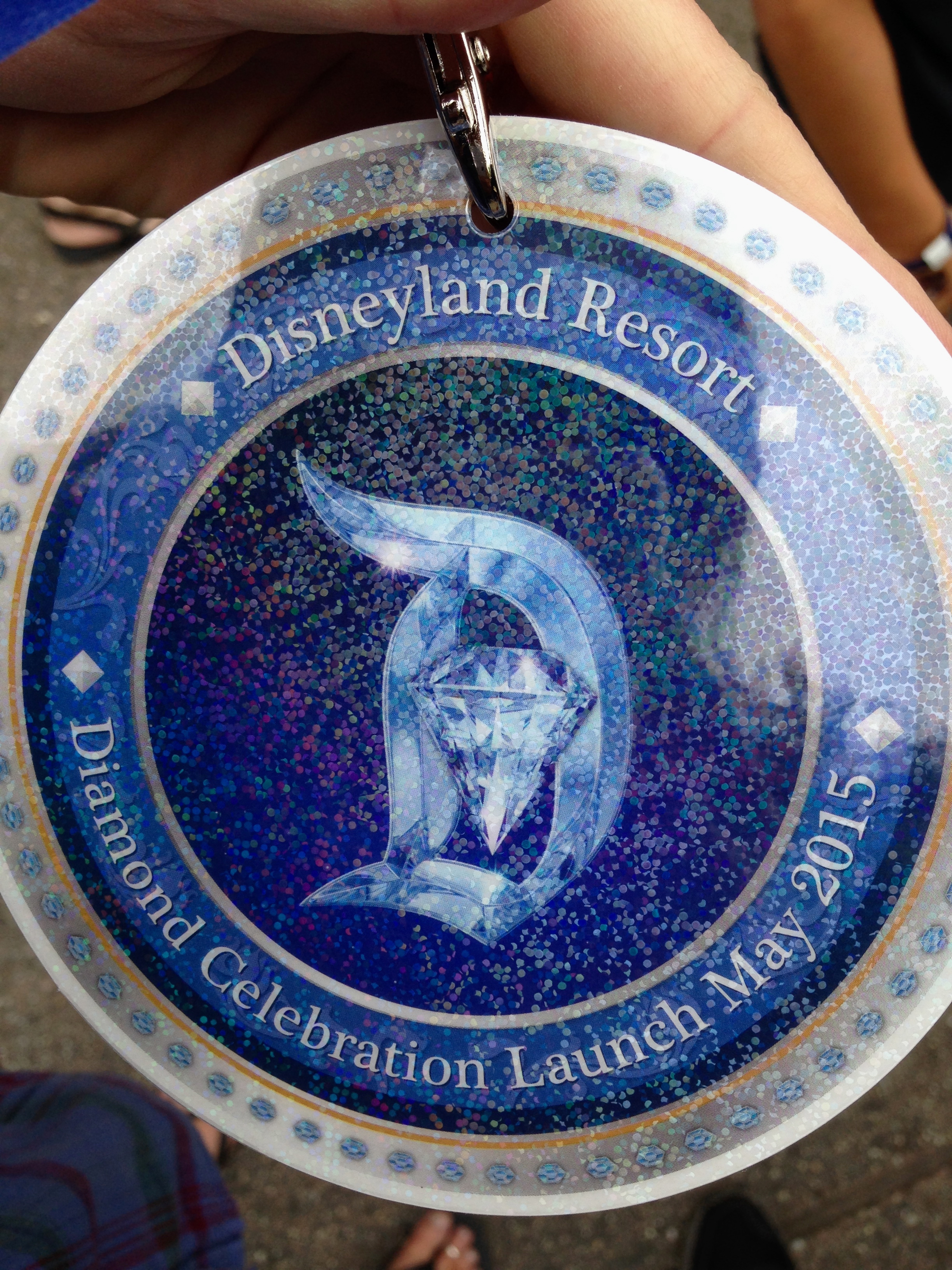 World of Color – Celebrate! The Wonderful World of Disney

In California Adventure, you can see the new World of Color show — Celebrate! The Wonderful World of Walt Disney —  which takes place once, or sometimes twice, a night at Paradise Pier. The show combines music, lights, water, fog, fire and lasers in a breathtaking display that both you and your kids will love. 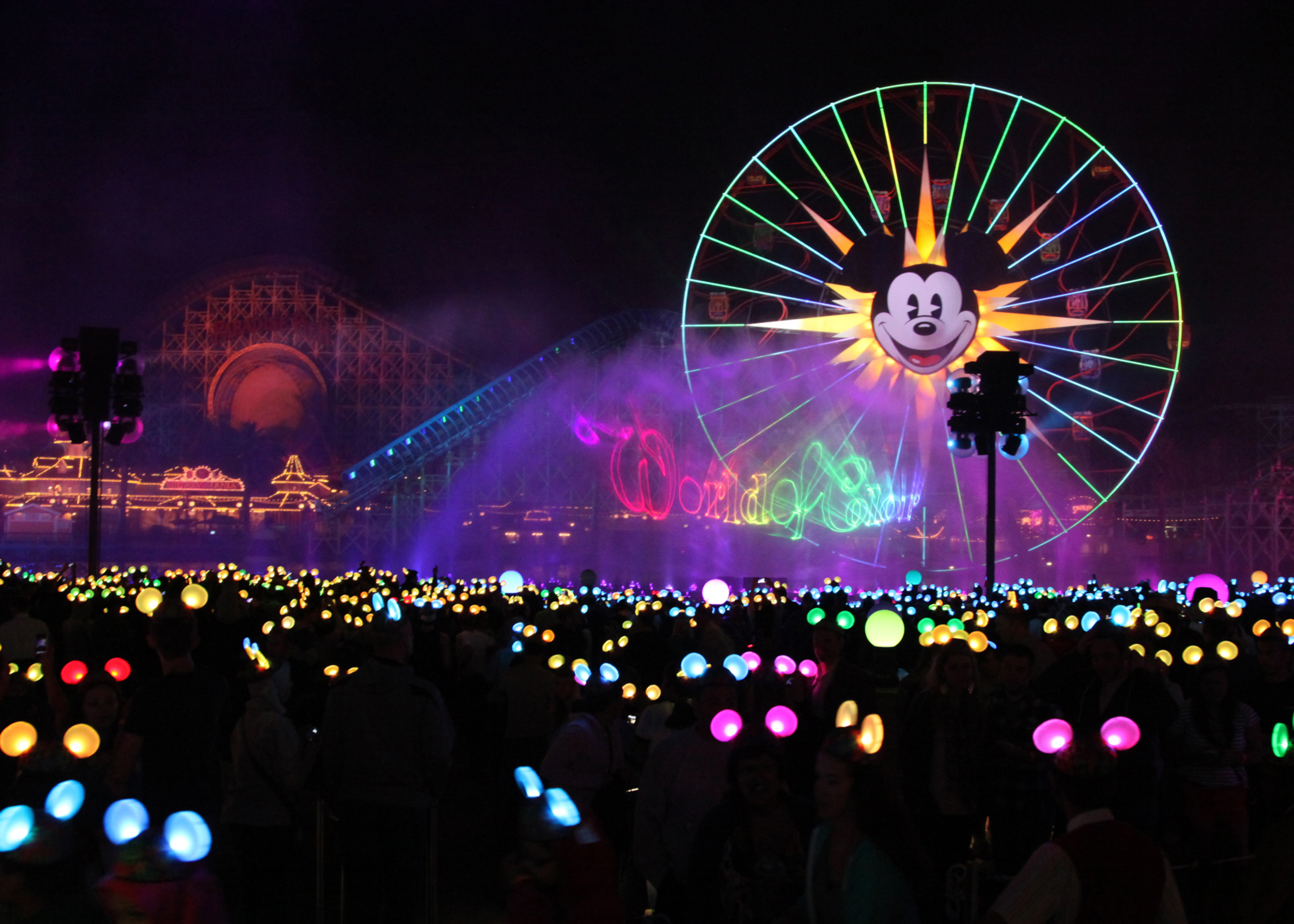 The show takes place on a football field-sized submersible platform at the base of Mickey’s Fun Wheel that includes nearly 1,200 fountains and 20,000 lights to create a colorful water display. They even magically create a 19,000 square-foot water projection screen! 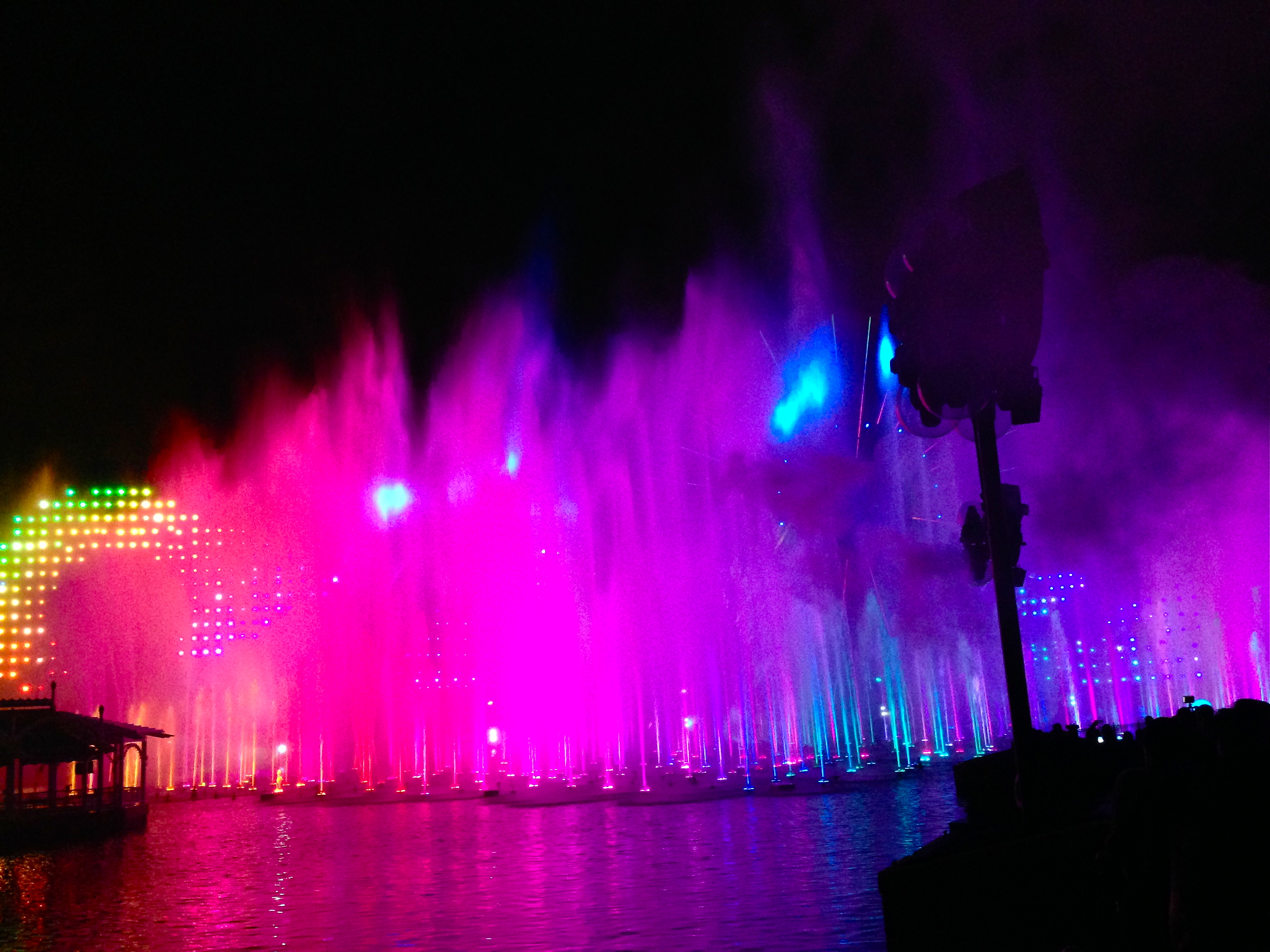 Hosted by Neil Patrick Harris and the one-and-only Mickey Mouse, the World of Color show features a look back at Walt Disney’s journey to create Disneyland, as well as dozens of musical numbers from your favorite Disney and Pixar shows. My kids loved the Star Wars song, but I think this Frozen number was pretty spectacular too:

Though you may feel a few misty sprinkles depending on where you watch the show from, you won’t get wet. If you get a front row seat by the fence overlooking the water, do note that there are fog jets that shoot straight up and may frighten small kids. Same-day FASTPASS tickets that reserve a preferred viewing spot for World of Color shows are available at the Grizzly River Run Disney FASTPASS service machines or you can also book World of Color Dining Package at Ariel’s Grotto, Wine Country Trattoria or Carthay Circle Restaurant, which includes a three-course, prix fixe menu dinner and a reserved spot in the World of Color preferred viewing area.

The new nighttime parade — Paint the Night — is another one of the Diamond Celebration must-see shows. Tinkerbell starts off the procession that includes nearly a dozen floats decorated with over 1.5 million individually controlled LED lights. The parade literally lights up the night! 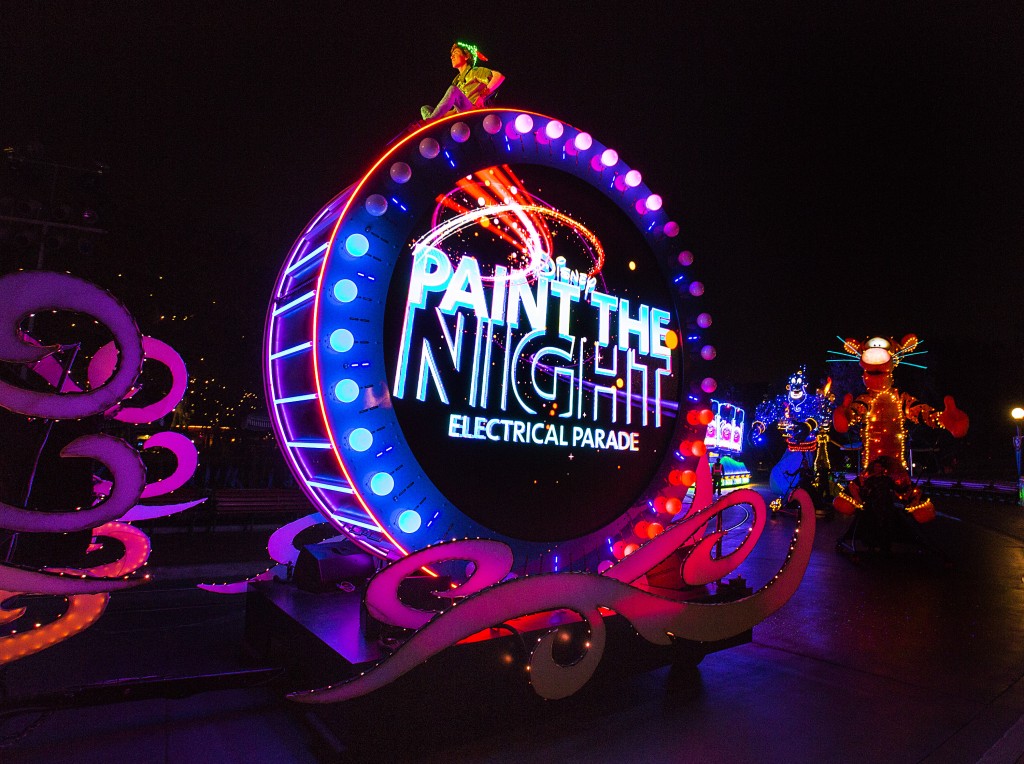 Along with the illuminated floats featuring favorites like Ariel, Cinderella, Buzz and Woody, Mike and Sulley, Lightening McQueen,and a 54-foot Mack, among others, you’ll love the high-energy music, special effects and the creatively-costumed performers dancing down the street. 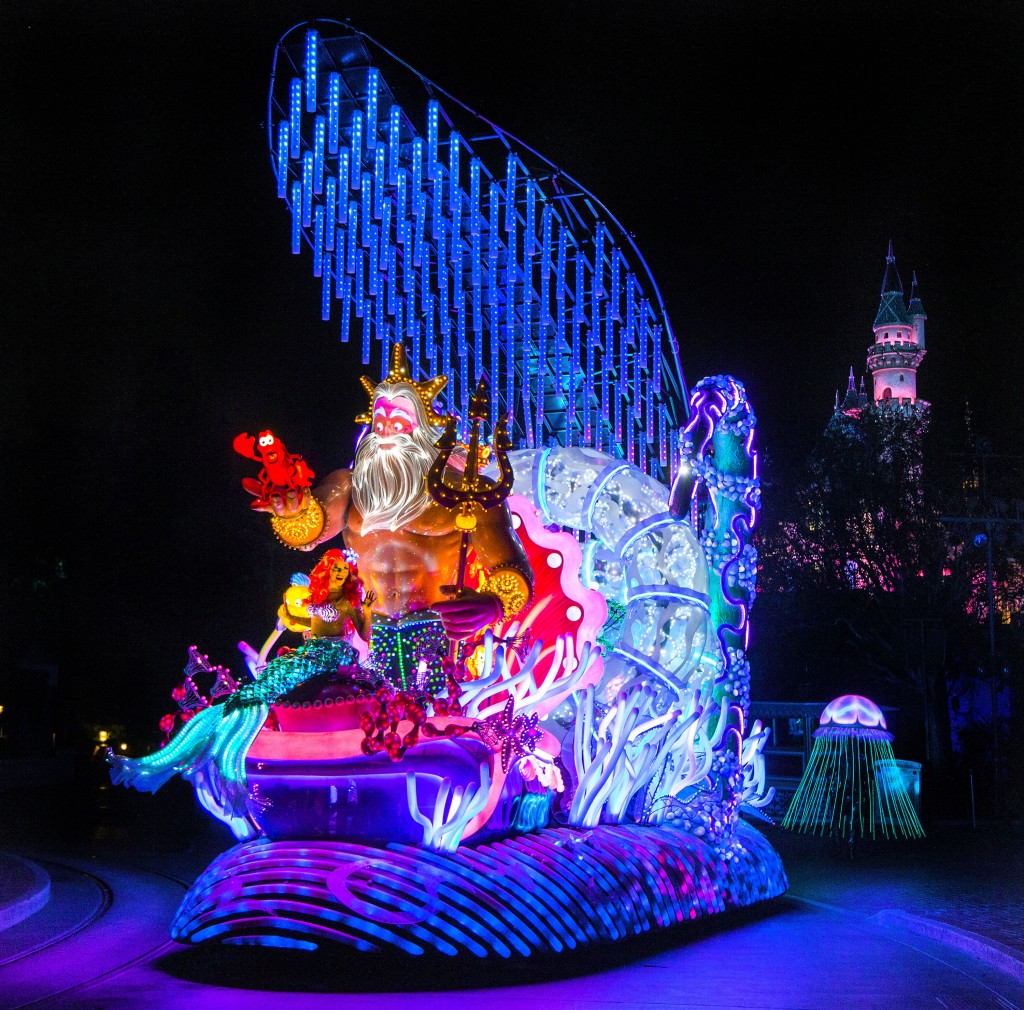 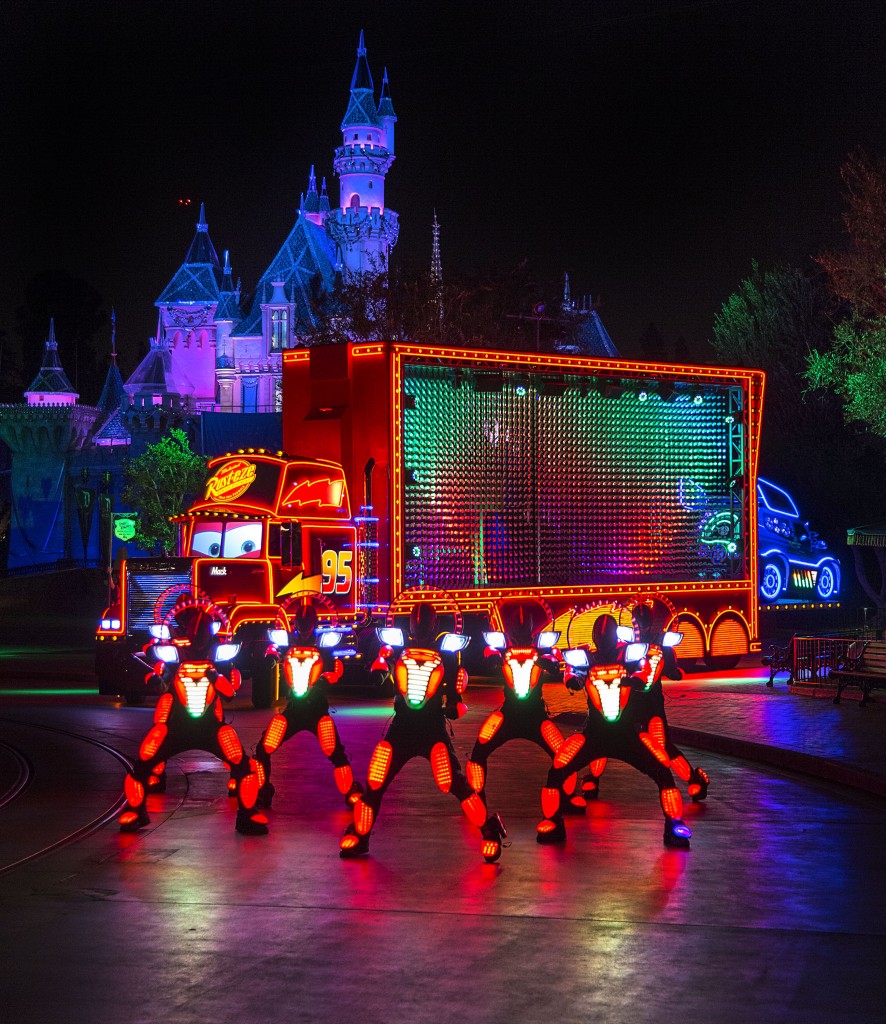 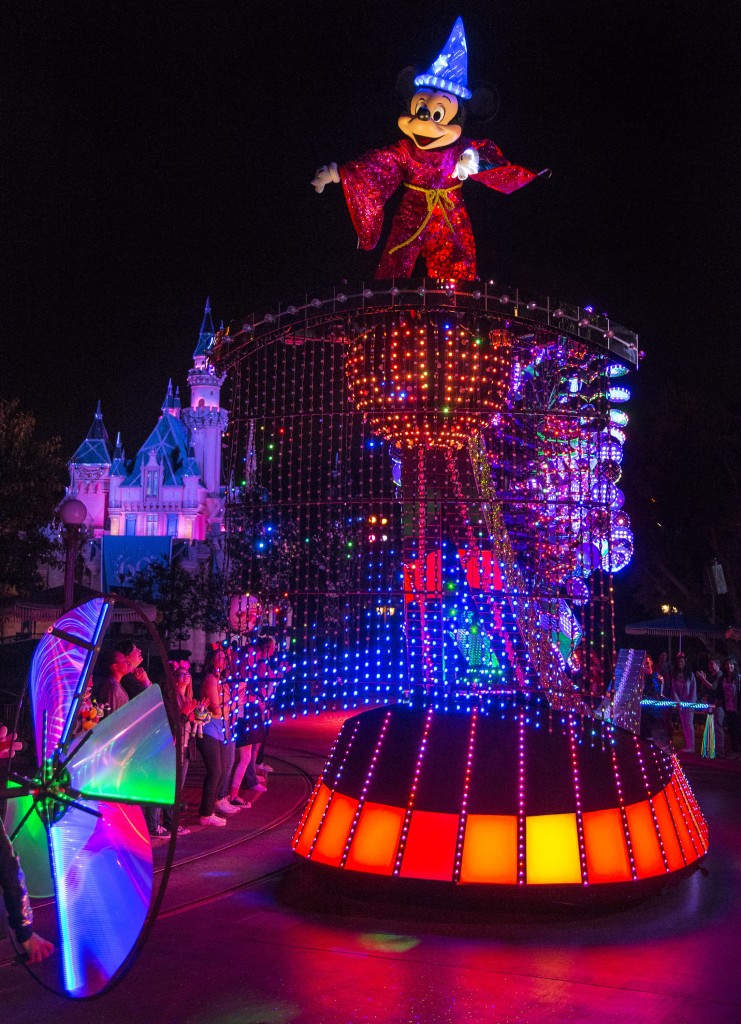 Of course the show wouldn’t be complete with a finale by your favorite Disney classics like Goofy, Donald and Mickey and Minnie! The show runs twice a night at 8:50 p.m. and 11 p.m. and can be viewed at It’s a Small World, by Sleeping Beauty’s Castle, along Main Street and around the Town Square.

After the parade is done, you’ll want to stay for the new Diamond Days Celebration Disneyland Forever Fireworks, which start at 9:30 p.m. every night. 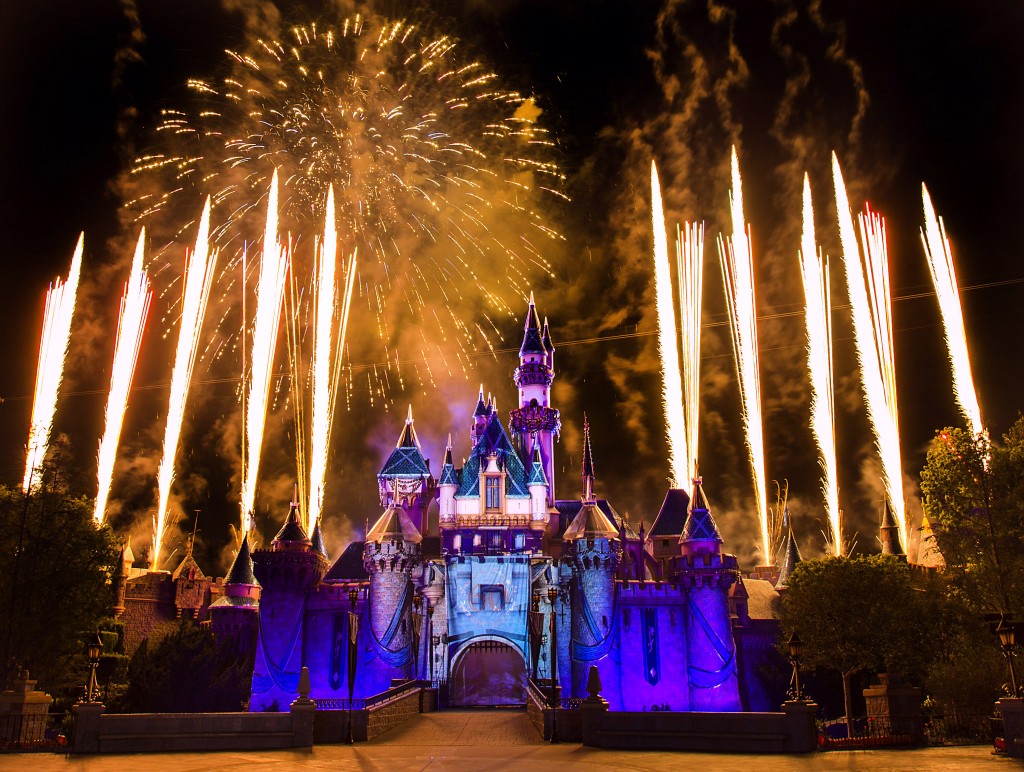 This is so much more than just a fireworks display! While the fireworks are truly breathtaking, this show features a dazzling display of lights, music and special effects to transform the storefronts of Main Street, the front of It’s a Small World, the Matterhorn and along Rivers of America, for an immersive experience. Each location provides a unique viewing experience you’ll want to check out.

We watched the show between the castle and Main Street and with the help of digital projection, lights, lasers, inflatables and even rooftop snow machines, the store fronts of Main Street came alive! One minute, the stores are seemingly bouncing and stretching with color and the next they are underwater as you travel with Ariel, then covered in heffalumps with Winnie the Pooh, then showering you with snow for Queen Elsa! It truly is magical every direction you look and with 360-degrees of action, there isn’t a bad seat. 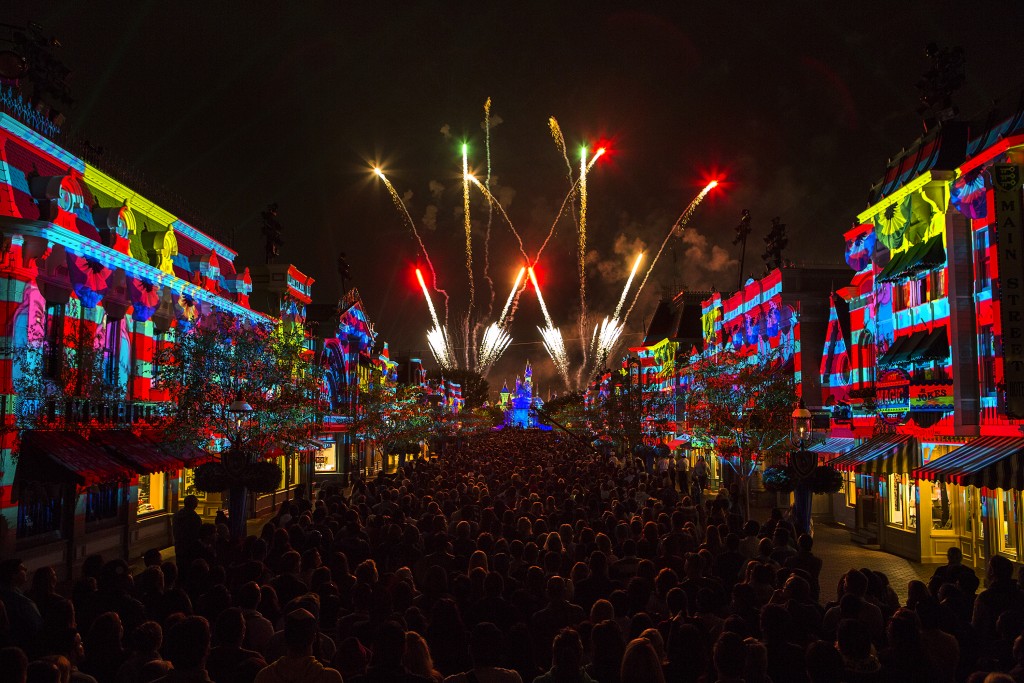 For the first time ever, in addition to Tinkerbell flying over the castle, Nemo joins her as well. There are also two new original songs — the Disneyland Forever theme song, “Live the Magic,” and the closing song “A Kiss Goodnight,” written by Richard M. Sherman and sung by Ashley Brown, star of the Broadway production of “Mary Poppins.” 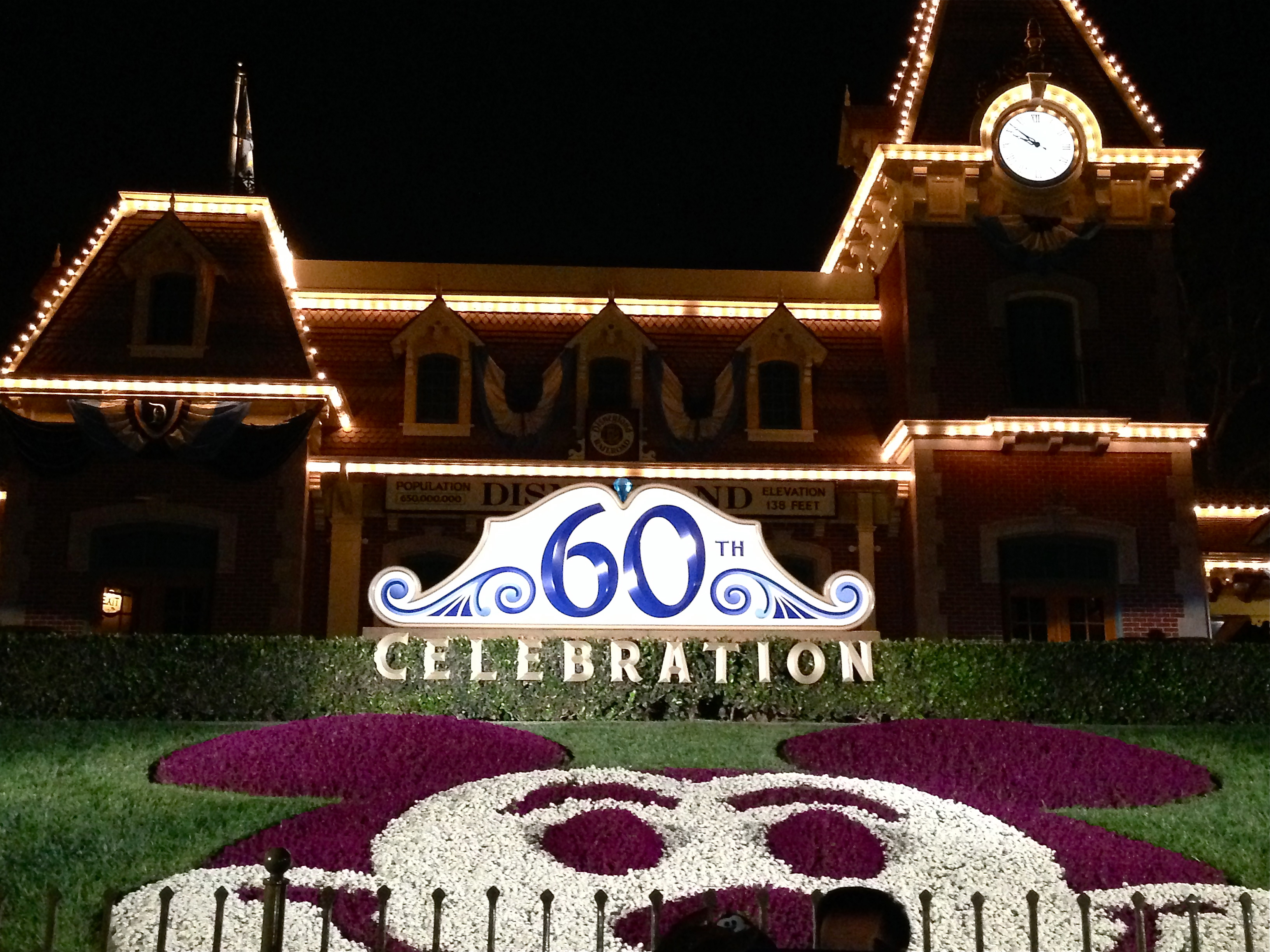 Whether you’re a Disney regular or a first-timer like my kids, you’ll want to make a date to visit the park in 2015 to catch these three new shows and all of the other special touches for Disneyland’s 60th birthday. Visit Disney’s Diamond Celebration page to see more about all the new events, souvenirs and treats to celebrate 60 years of Disneyland magic! 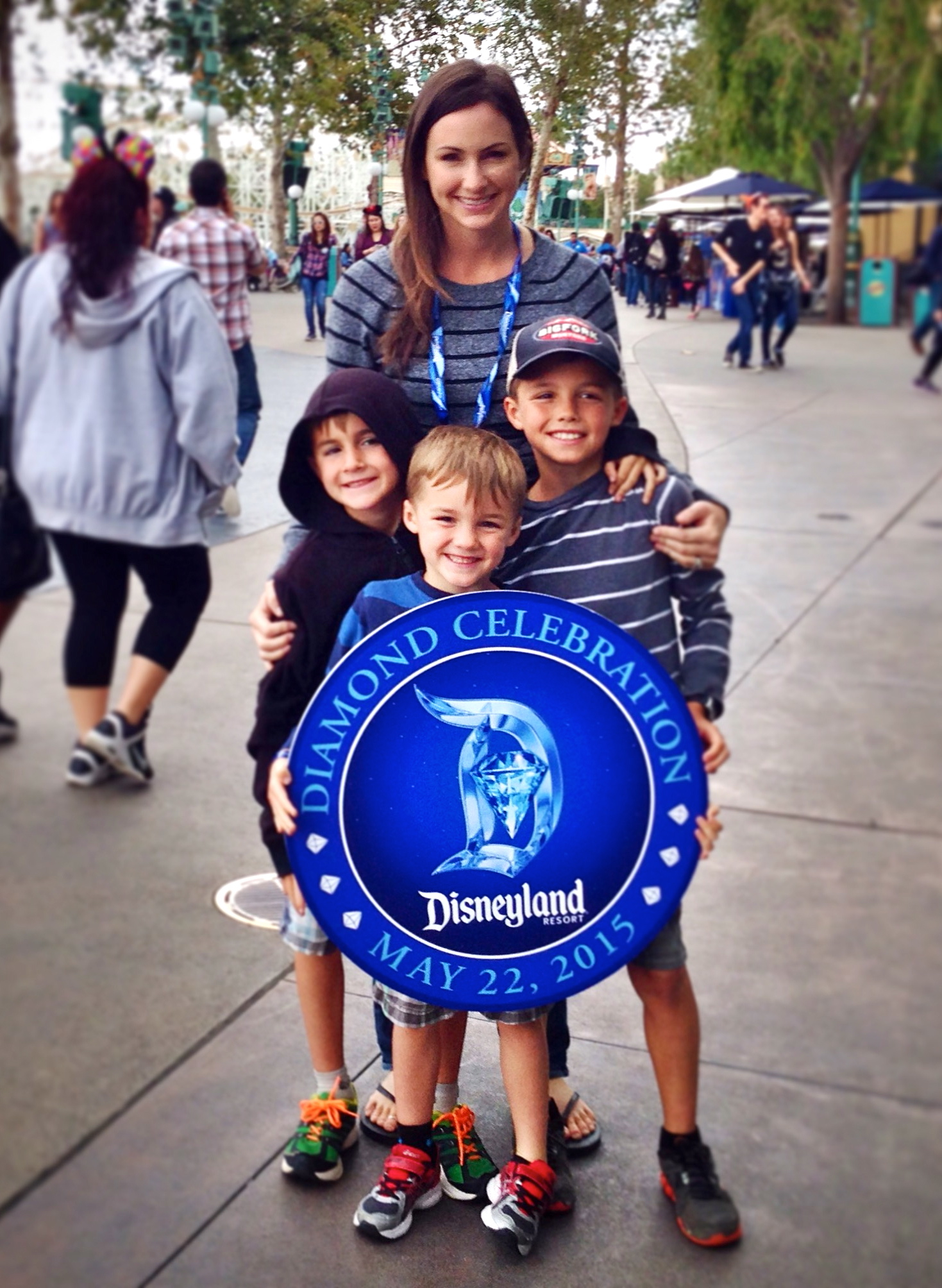 SSM was not paid for this post. We were provided with complimentary accommodations and access to the park. Opinions are our own.


Kate Bayless is a Southern California-based writer and a mom of three. She writes regularly about beauty, travel, health and wellness for both digital and print outlets.