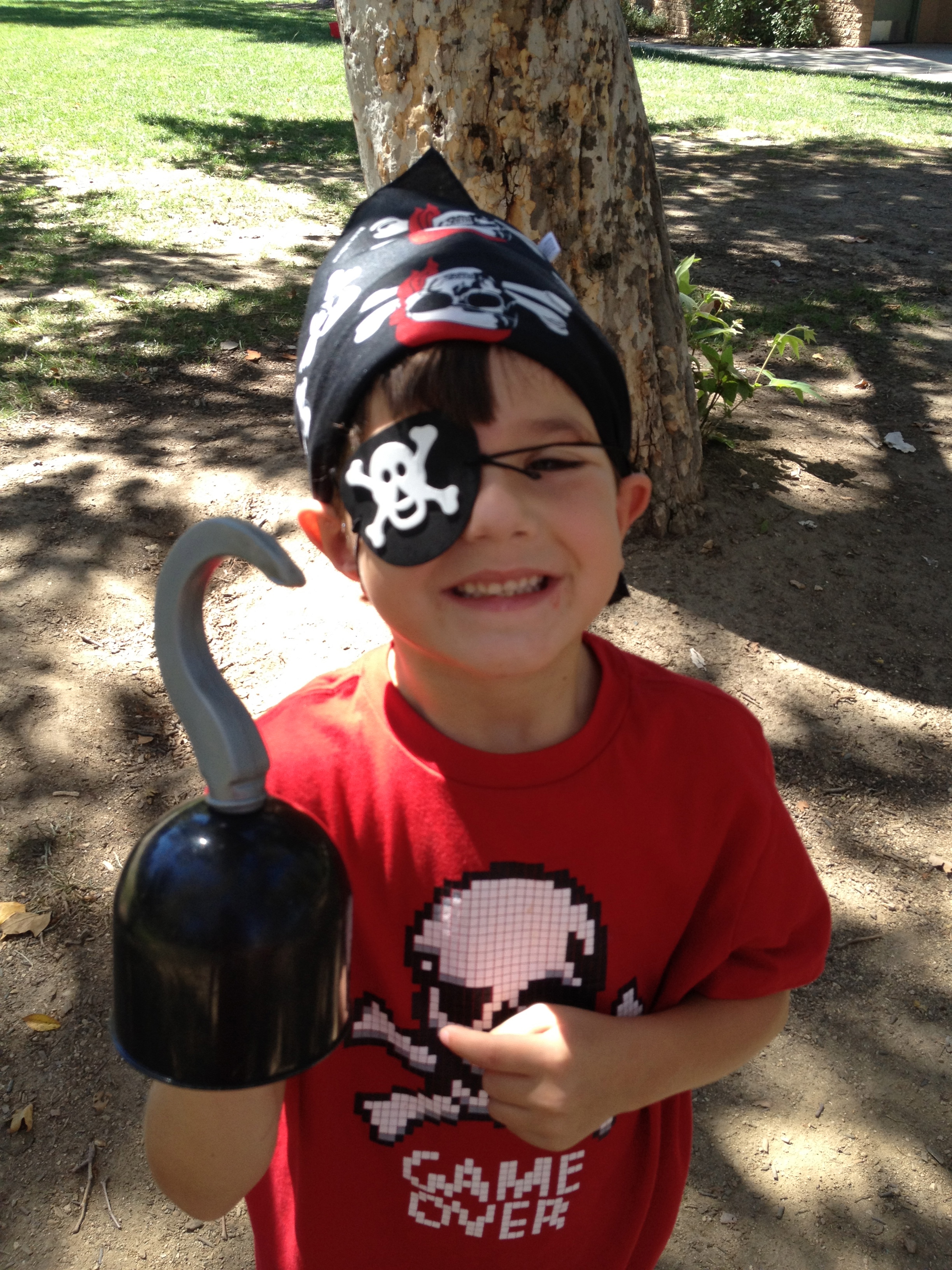 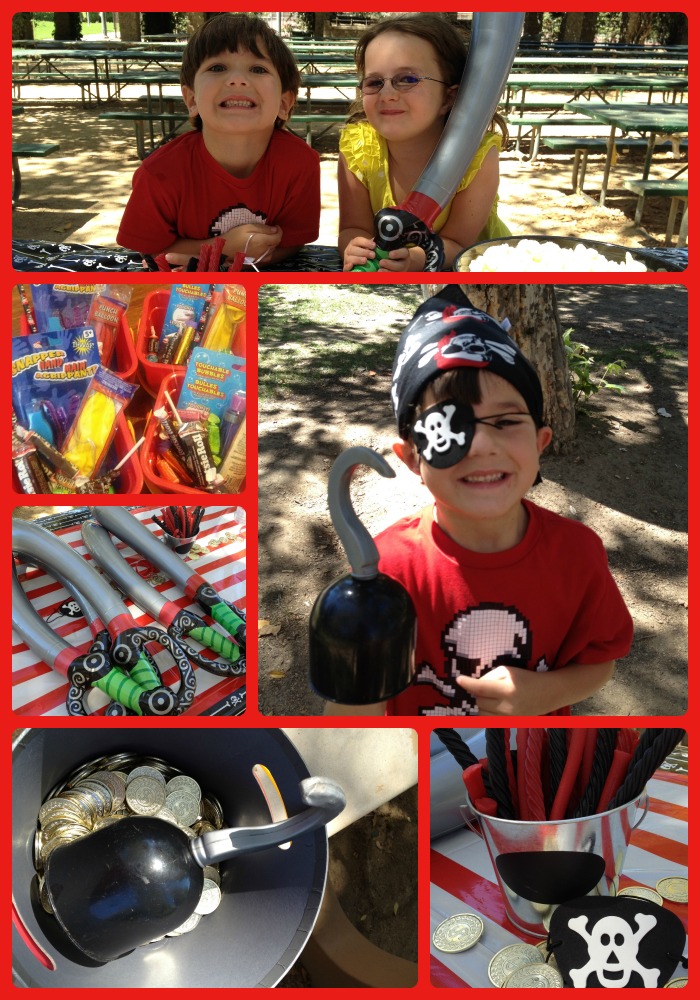 My son just turned 6 and I wanted to throw him a Pirate themed party.  I asked him if he was okay with the idea and he seemed to like it.  He instantly started talking about finding treasure and what games we could play.  Then my mind started to run wild with party ideas for the perfect pirate party.

A treasure hunt was definitely in order and so the only logical place to have this was at a park, where the kids could run and hunt for treasure.  We live near a park that is called the Pirate Park, because the playground is shaped like a ship, has flags , cannon balls and even a sea monster.   Next came the event planning, which I love to do.  I was on a budget (but went over, of course) But this is what I did… 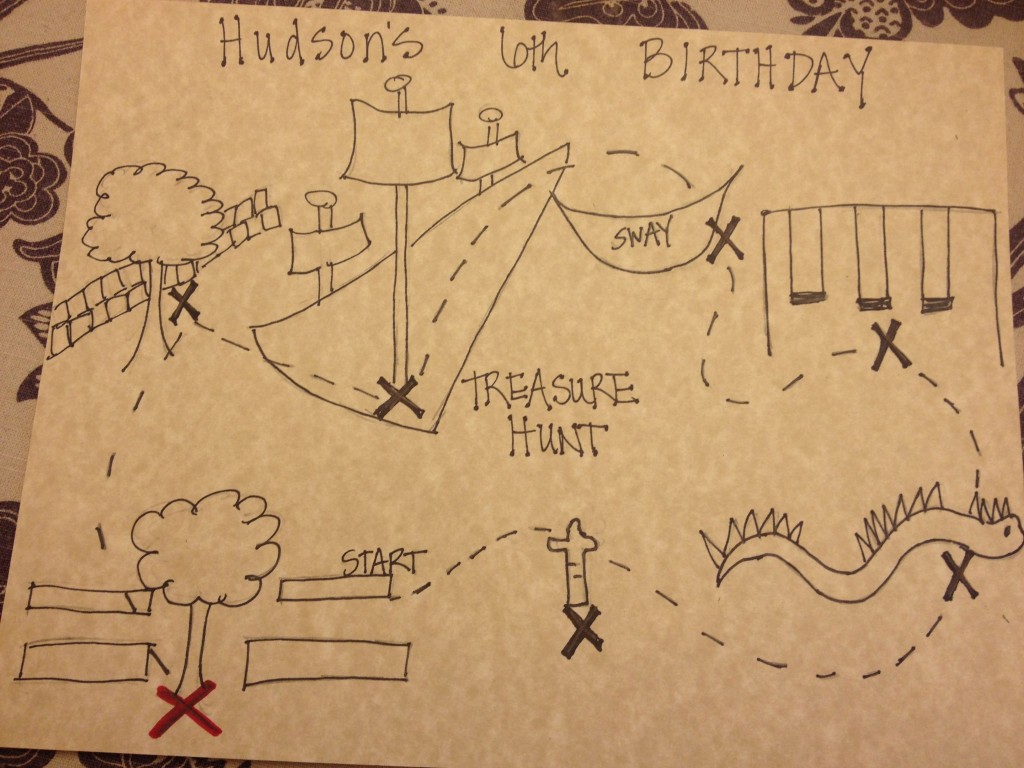 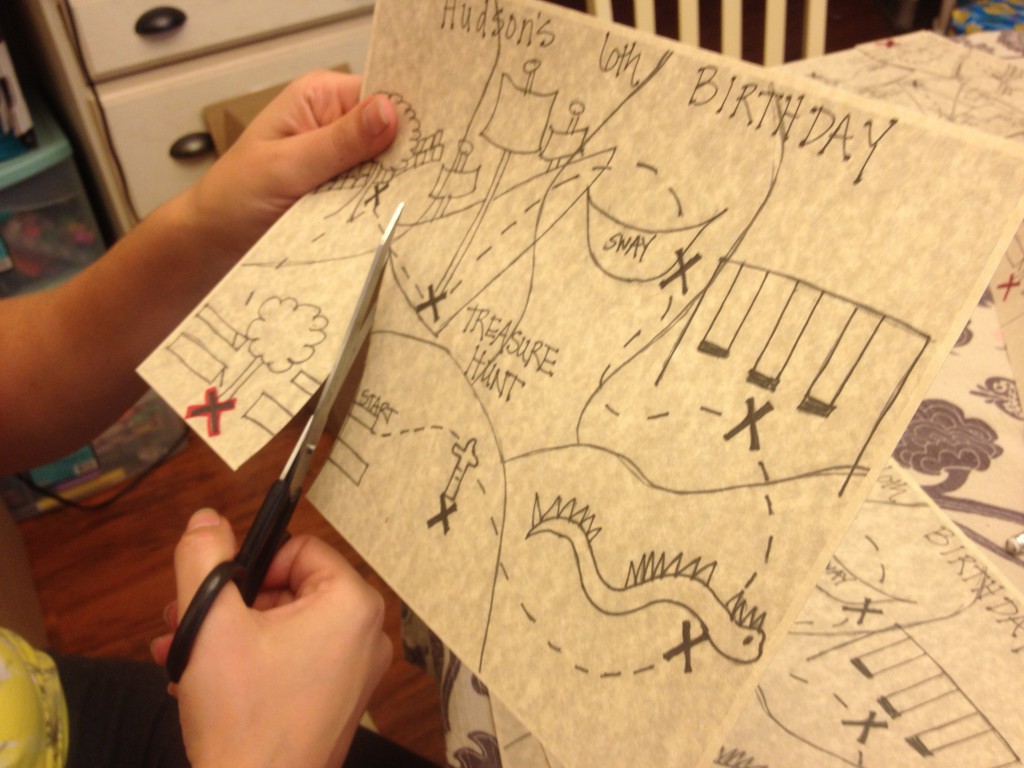 1.  Treasure Hunt –  We drew a map of the park, pre planning where we would put the clues.   We made 6 copies of the map.  Then we cut the map like into 7 puzzle pieces.  Each puzzle piece with a black X was put into a paper bag and  hidden at the park   My husband had the first puzzle piece to begin the hunt with.  The red X was where the kids would find the hidden treasure, aka goodie bags/ buckets filled with toys and candy. 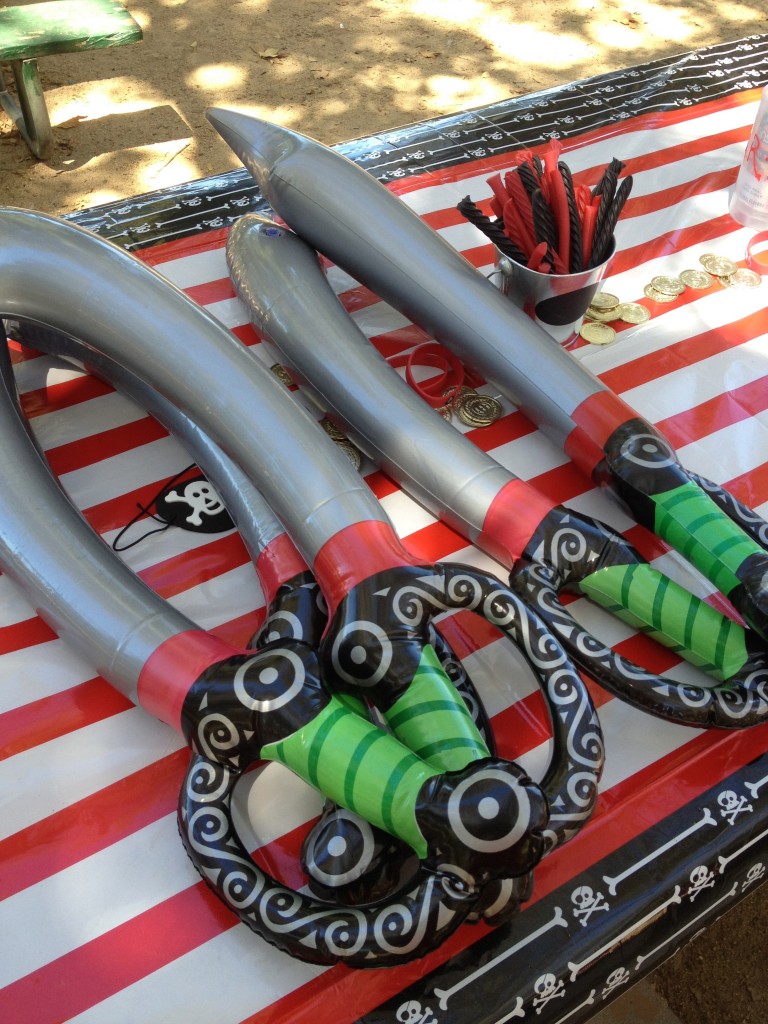 2.  Swords – I wasn’t sure about having swords at the party at first.  Even some of the play ones I found were kinda hard.  I did not want kids hitting each other with them and getting hurt but then i found these awesome blow up swords at Party City.  Perfect.  $2.99 each so a little pricey, but I couldn’t resist. 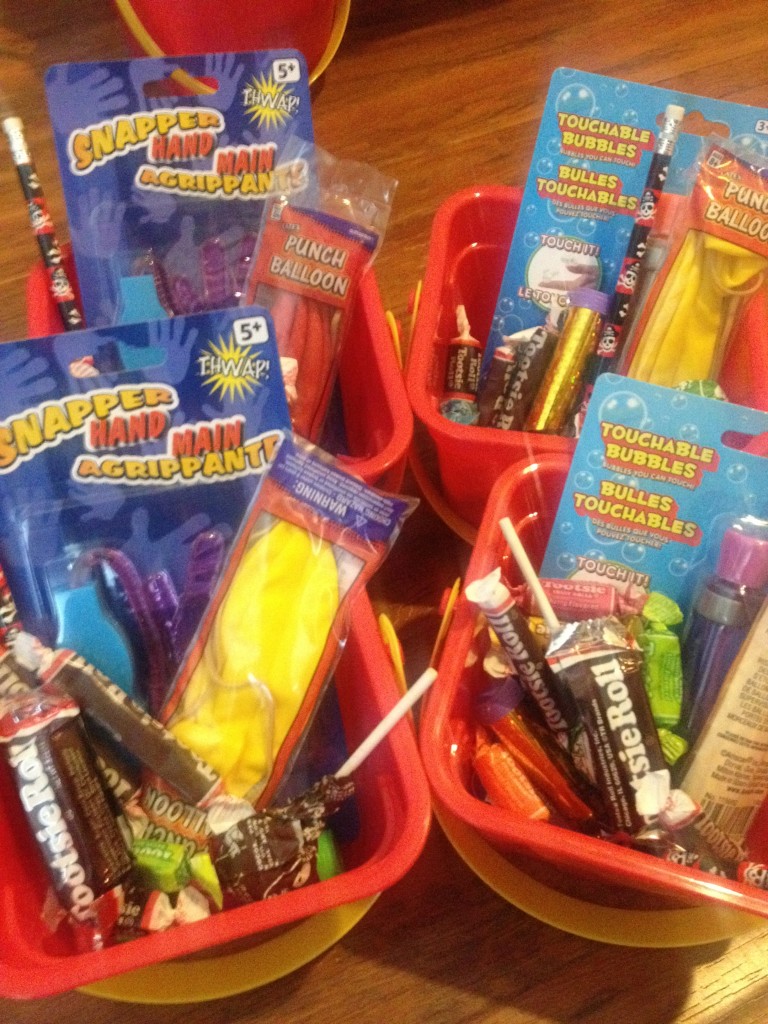 3.  Treasure – I bought red sand buckets and filled them with toys and tootsie rolls.  Once the kids were on the treasure hunt with my husband, I set all the treasure (goodie buckets) under a tree where the red X marks the spot on the map.  The buckets were 99 cents at Party City.  Also, look for fun toys and little gifts at Old Navy and the dollar bin at Target. 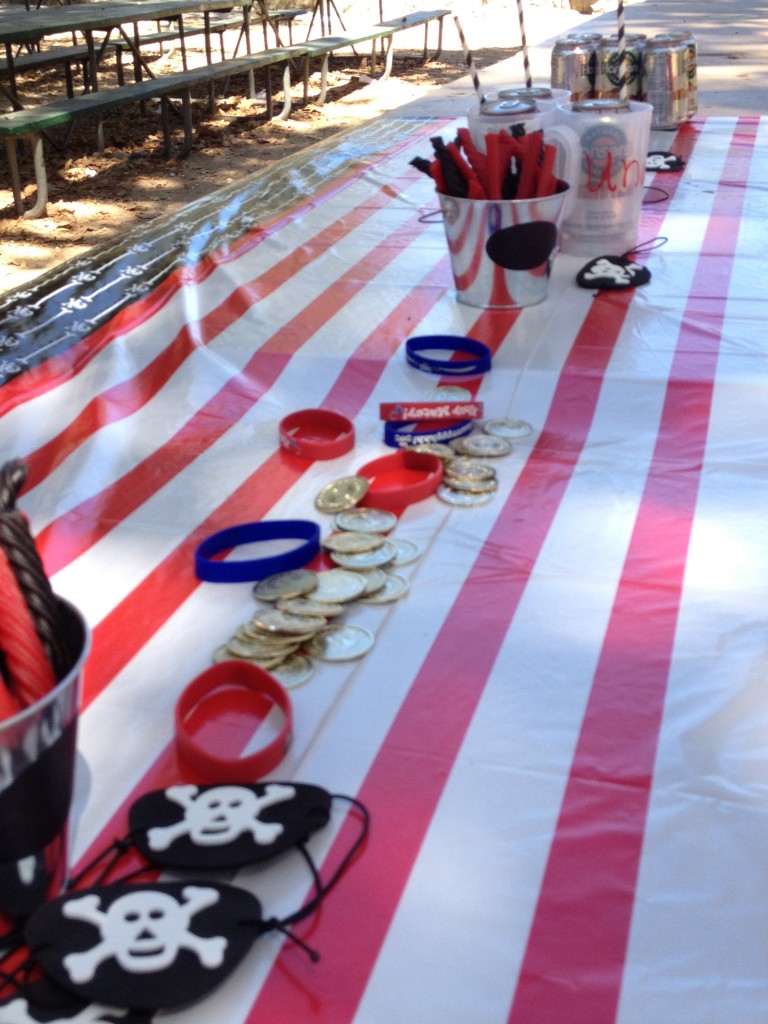 4.  Eye patches & Coins –  Nothing says pirate like an eye patch and some gold coins.  I simply placed these down the center of the table for decoration and for the kids to take.  We also used the gold coins to play a coin toss game into buckets for the kids to win prizes. 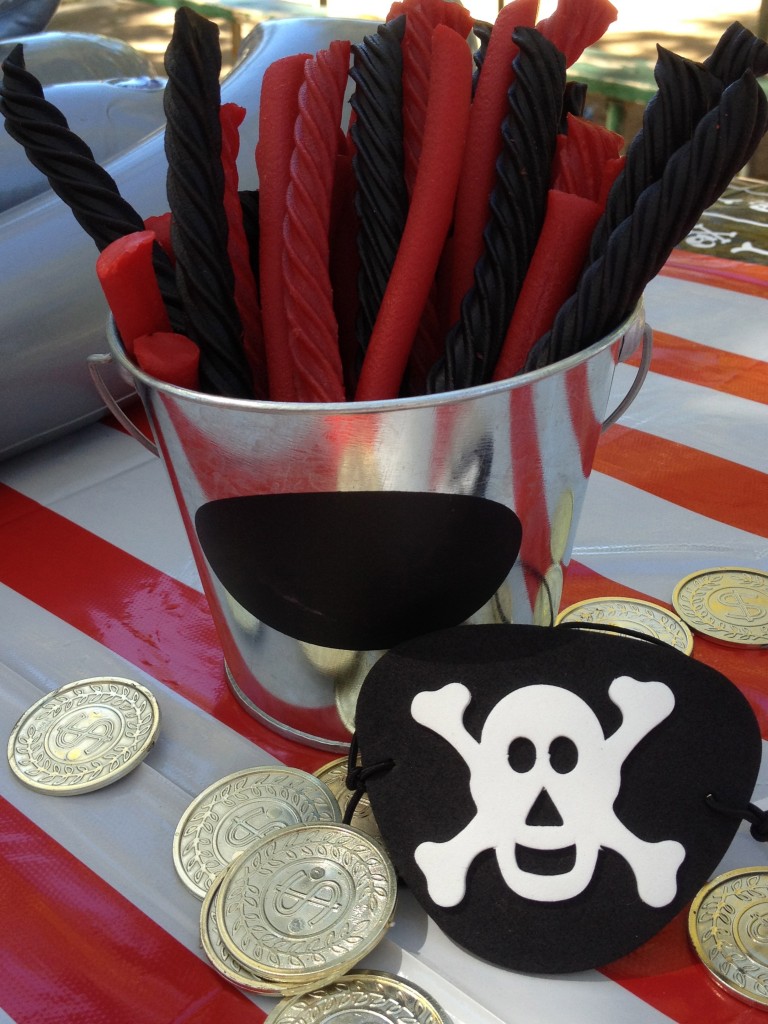 5.  Pirates Booty & Licorice– My son loves Buccaneer Joe’s Unburied Treasure, white cheddar corn puffs from Trader Joes (not the original Pirate’s Booty, but much softer and puffier)  We had to have this for sure.  I also filled some mini buckets with red & black licorice to put n the center of the tables, for decoration and a sweet treat.  The kids were not fans of the black licorice.  Which I knew – but it looked good and went with the theme. 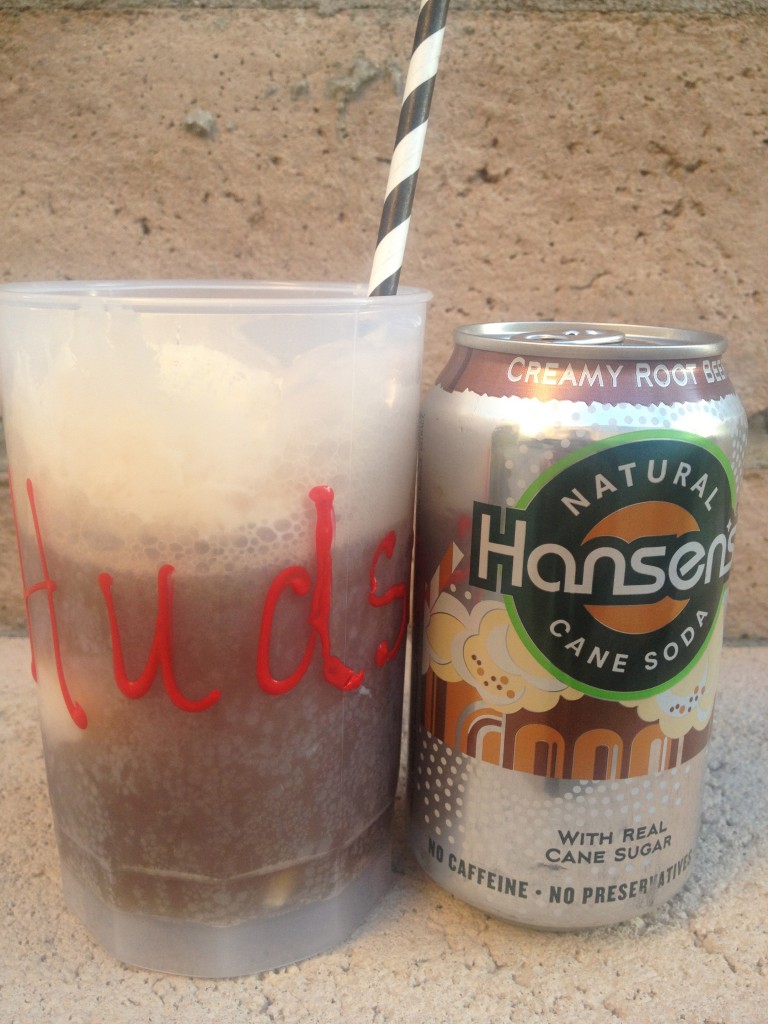 6.  Root Beer Floats – It is still very hot in California and the sound of cake on a hot day just doesn’t sound good to me.  I thought Root Beer floats would be a better birthday treat for all the little pirates.  Hansen’s natural soda provided all the Root Beer for this party and I ordered the root beer mugs online through Ebay.  I dressed up the mugs a bit by writing all the kids names on their cups with red puffy paint.  The mugs were another goodie to take home. 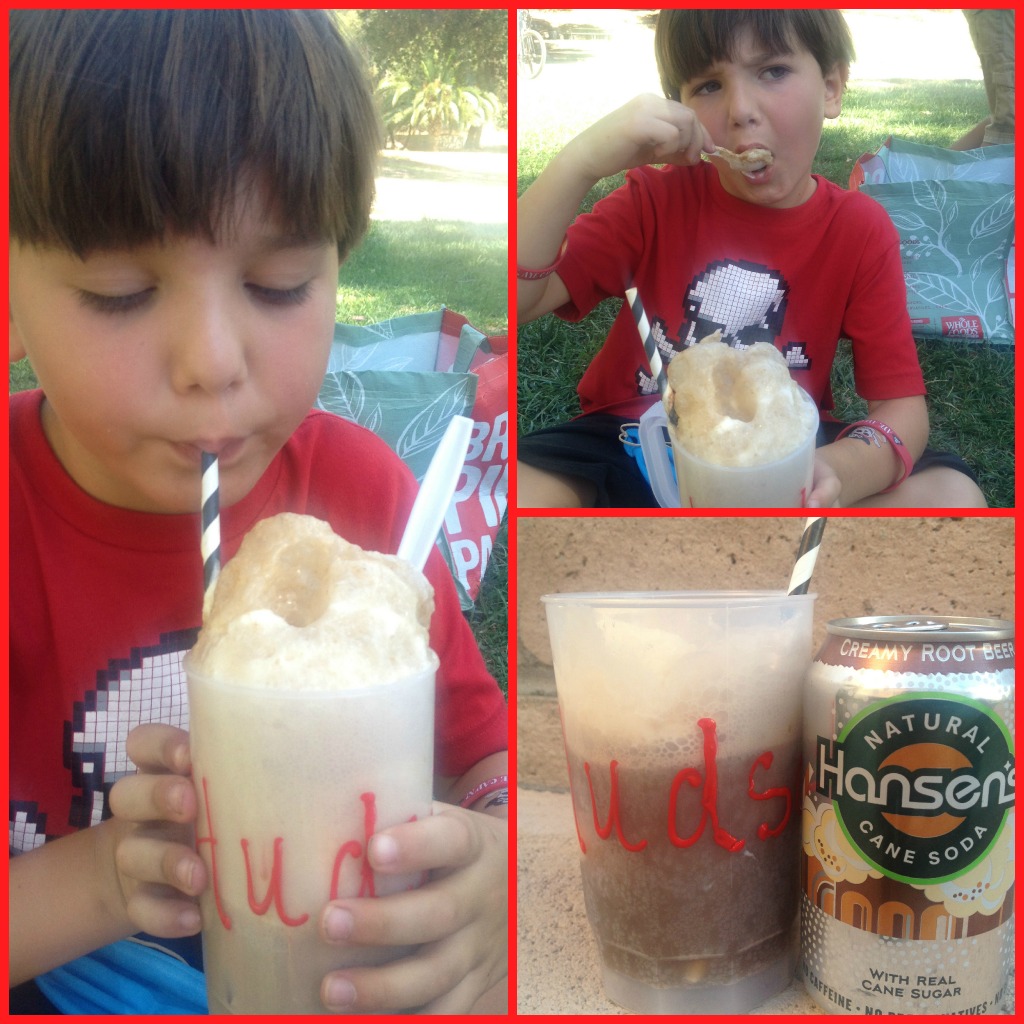 After the hard work of running around looking for treasure all the kids were treated to a nice cold Root Beer float!  Because Pirates don’t eat cake 😉  Even some of the parents grabbed a cup and started making one for themselves.

Happy Birthday Hudson!
Kids Party Planning Tip:  Two of my son’s favorite things are Pirate’s Booty / Buccaneer Joe’s Unburied Treasure and Hansen’s Root Beer.  We can’t leave Trader Joes without them ending up in the cart.   So I worked them into his party.  If your child loves a type of food or special treat be sure to include it at the party.  That particular food or treat just may help you create the theme as well.

Disclosure:  This is a sponsored post, all my savvy thoughts and  sassy opinions are my own.  We honesty love Hansen’s at our house.  Hansen’s sent me product for my party.