The Minion Rush Game for ipad and Android is available today! My kids actually got a sneak peek at  this game last week while we were at Universal Studios in Orlando, Florida for the Despicable Me 2 press trip and loved it! We were told that it would come out next Thursday and my daughter kept reminding herself so she could download it right away.  She wanted to be the first.

So, this morning at 7:00am my kids literally rolled out of bed, grabbed for their ipads and downloaded Minion Rush. It was literally the very first thing they did, my daughter hadn’t even put on her glasses yet.  They played all morning and we were even late to summer camp becasue of those little minions. They tell me that it is similar to the game Temple Run, so if your kids play that, they’ll love this. I even sat and watched them play for awhile, it’s a cute game and even I can’t get enough of the silly minions! 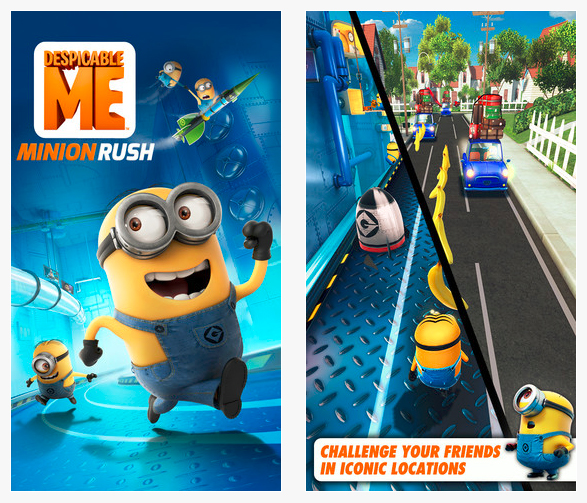 Gru’s loyal, yellow, gibberish-speaking Minions are ready for their toughest challenge in Despicable Me: Minion Rush. Play as a Minion and compete with others in hilarious, fast-paced challenges in order to impress your boss, (former?) super-villain Gru! Jump, fly, dodge obstacles, collect bananas, be mischievous, and defeat villains to earn the title of Minion of the Year!

DESPICABLE ME 2 – in theaters July 3

Must Have Pregnancy Apps

Make the most of your kids’ screen time {Giveaway}