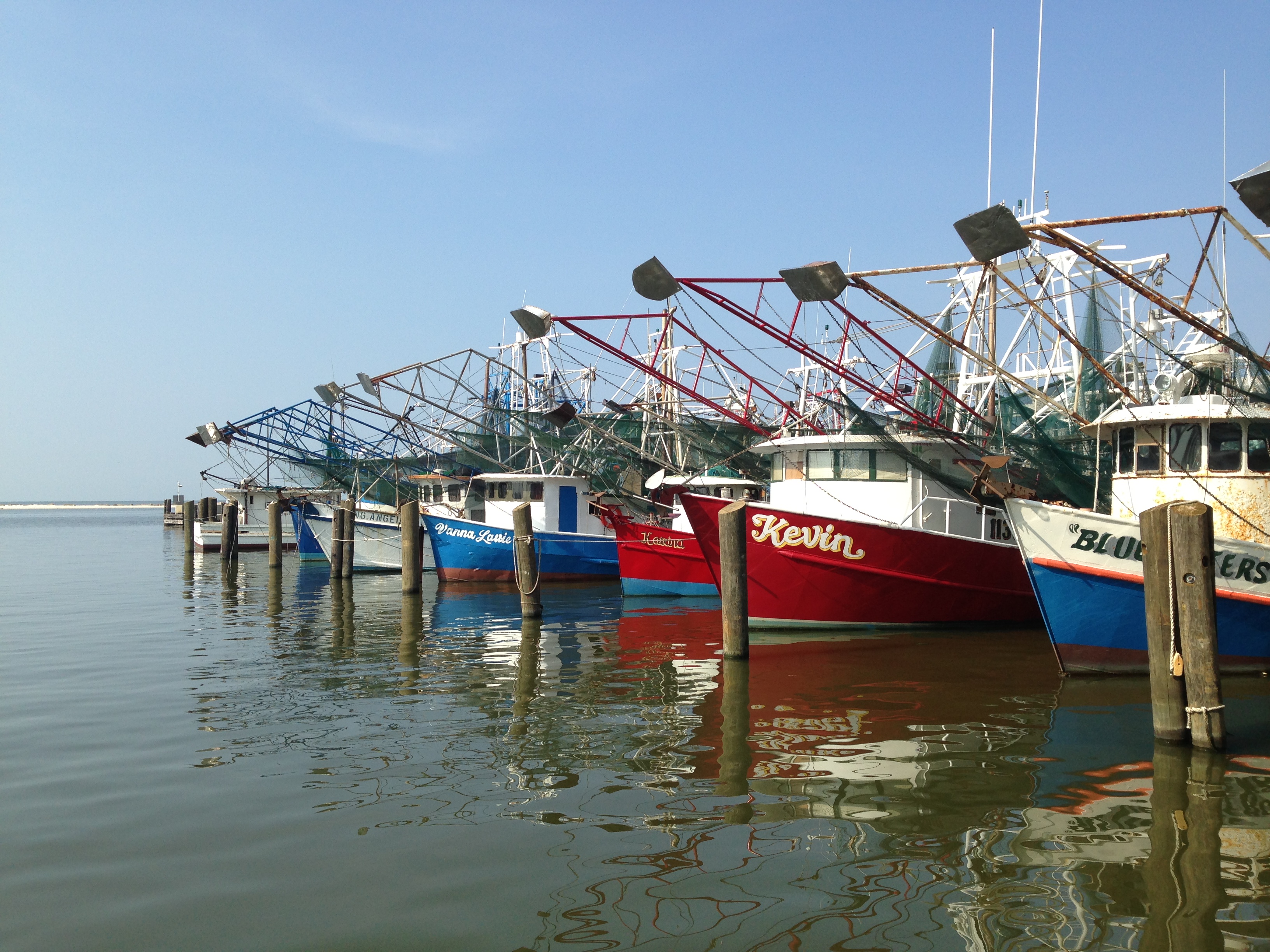 The Gulf Coast is a mecca of flavor, culture and good ol’ southern hospitality. It doesn’t hurt that there are pockets of pristine sandy-white beaches, turquoise water and loads of coastal activities to choose from. I had the great fortune of visiting four of the five Gulf Coast states recently with my little ones and here are a few of the discoveries we made along the way. 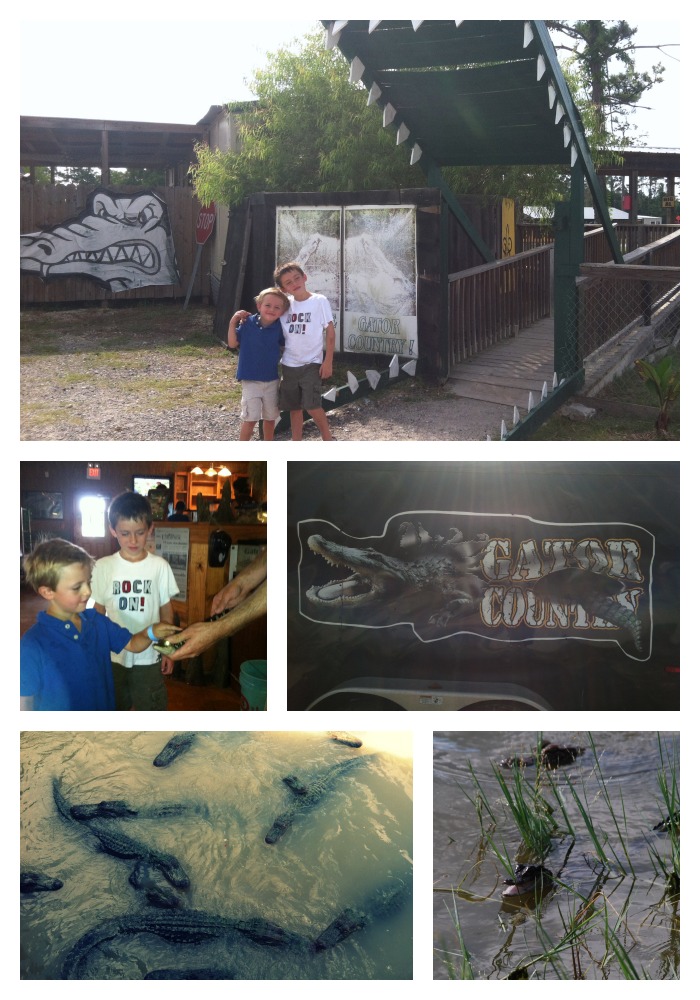 Though it’s technically not “on the coast,” Gator Country in Beaumont, Texas is still close enough – just off I-10 – for me to consider a must-do (especially if you have reptile-adoring little boys in tow). Gator Country is stocked with hundreds of alligators, crocodiles, snapping turtles, snakes and tons of other reptiles.

I knew we were in for an adventure upon entering the park, as we had to cross a wooden bridge over ferocious, snapping alligators (okay, they weren’t that ferocious just swimming around, but I swear I almost backed out when I opened a booby-trapped cooler labeled “gator food.” If you go, DO NOT open that cooler!) The boys thought it was hilarious that I was such a scaredy-cat mess, so I knew I had to keep my composure a little better.

The bridge led us to a great wooden building filled to the brim with reptilian life. We were thrilled to have gotten there just as they were feeding the baby alligators and all had a chance to pet and hold them (somehow “petting” an alligator just seems wrong, but it was still super cool) before we ventured out to meet the granddaddy of them all, Big Al, the largest alligator in captivity in Texas.

Alligator ponds scattered about the property, and were thankfully tucked behind protective fencing. Big Al was feeling quite shy in his solo-occupied corner unit, but everywhere else gators seemed to have been divided by size and were rampant (did I mention there were hundreds of alligators at this park? More than 350!) Apparently, admission includes swimming with the gators, but I was not about to go there.

The boys loved – I mean loved! – seeing all these cool creatures and had a great time feeding the alligators a snack (aka dog food, who knew alligators liked dog food?). We will definitely go back!

HINT: If you tune into CMT, Animal Planet, Bravo or A&E you may catch an episode of Gator Rescue, with the park’s owner, Gary Saurage, who is a an alligator rescuer and conservationist. 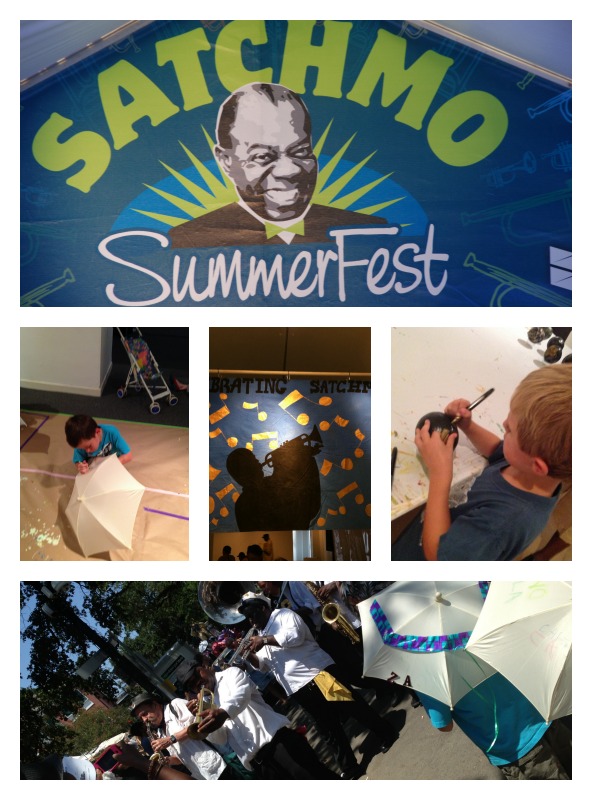 When you think of New Orleans most likely you think about Mardi Gras or Jazzfest, but if you’re on the Gulf Coast in the summertime you will not want to miss the Satchmo Summer Festival. Every year in early August the city of New Orleans celebrates the birthday of local music hero, Mr. Louis Armstrong.

This family-friendly festival is filled with kids’ art activities, music, local cuisine and most importantly, access to air conditioning in the French Quarter’s Old Mint. I loved showing off one of my favorite cities to the kids in this smaller locals festival, it was like a taster package. They danced to the music with their freshly decorated second-line parasols, caught beads from a mini-parade, tasted crawfish bread and rode in a pedi-cab through the Quarter. Best of all, it was FREE! I love New Orleans. 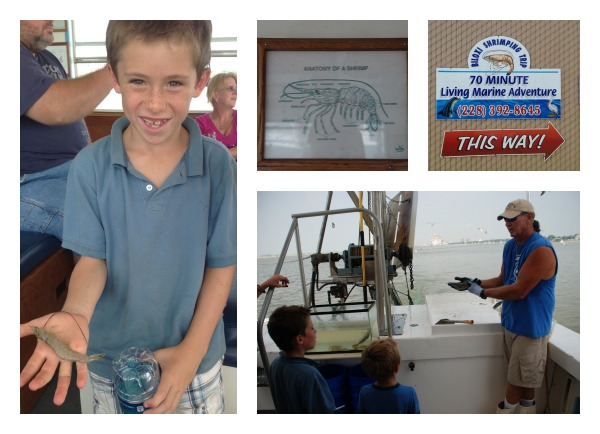 The Biloxi Shrimping Trip is more than a boat ride, it’s a hands-on excursion into the Gulf where the agenda is learning all about the shrimping business, the history of shrimping in Biloxi AND actually catching some real-live shrimp.

We learned that from the 1800’s – 1969 Biloxi was the Shrimping Capital of the World and all about how refrigeration changed the industry. We learned about the different varieties of shrimp: white, brown, pink and royal red, and that Biloxi shrimp is the Best in the World (Captain Mike and tour guide Steve both swear it’s true and I really believe them!)

HINT: This trip is a great value (only $15 for adults/$10 for kids). Try to go during shrimping season May through August. 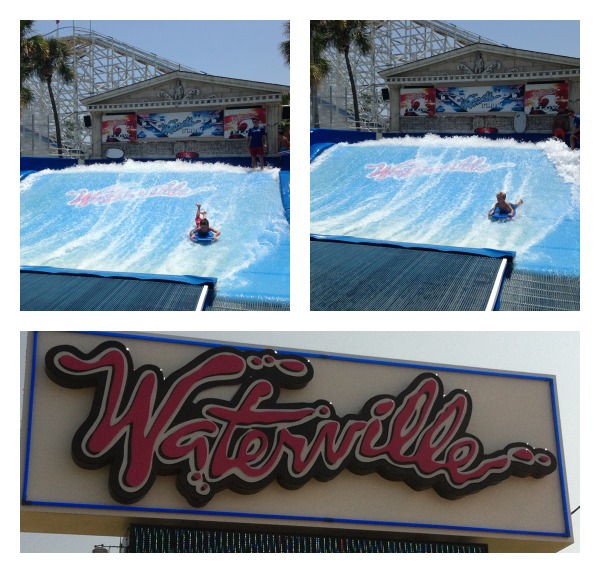 My kids LOVED Waterville! With water slides, lazy river, wave pool, plus a roller coaster, go-carts, and game room, how could you not? I felt safe enough at this perfectly sized amusement park to let my kids partner up with some friends and do their own exploring.

HINT: Get there early to claim a shady spot. Outside food is not allowed in but tailgating in the parking lot is perfectly acceptable.

The Beach at Orange Beach 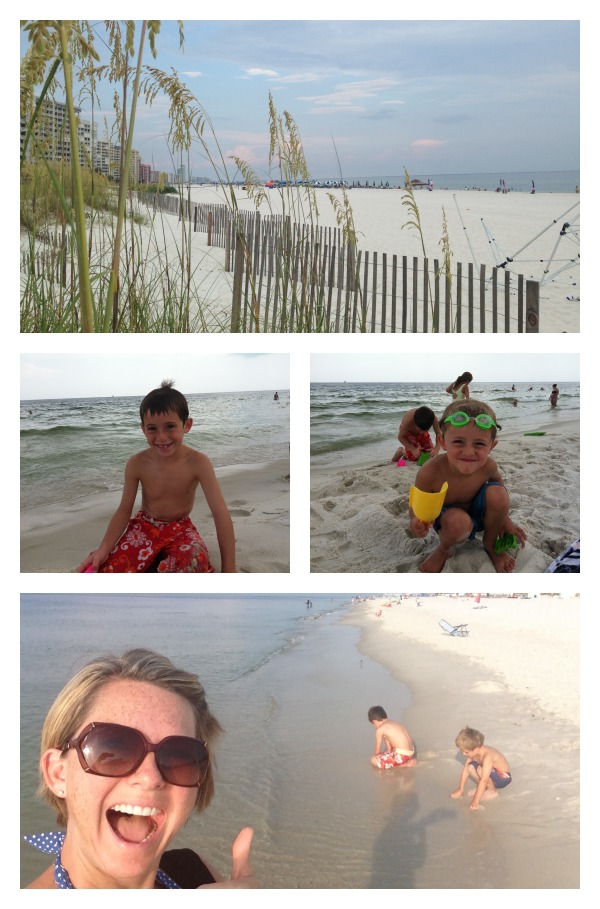 I can think of no other vacation that makes my entire family so happy, for so many hours, than a day at the beach. But, not just any beach; the sand has to have the perfect consistency for sandcastle building; the water has to be warm enough to jump right in, yet cool enough to escape the heat; the waves must be big enough to body surf, yet not intimidating to little beach companions. Enter the beaches of Orange Beach (and the rest of the Emerald Coast that spans down into Florida). Spend a few days here anytime of the year and your body and soul will be forever grateful.

The possibilities of options are truly endless along the Gulf Coast, whether you visit the western-most side in Texas, the southern tip down in Florida or anywhere in between, the entire coast is peppered with fantastic activities, food, music and culture. It truly is my favorite region in the United States.


Susan lives with her husband, two young sons, and a new super-cute puppy near the foothills of the Rocky Mountains in Boulder, Colorado. When she’s not chasing her boys on the ski slopes or watching them on the sidelines of the soccer fields, she helps start-ups with social media and online marketing. Susan is social media junkie and you can often find her live tweeting from just about everywhere she goes.

How to survive a family road trip without losing your mind!

Stepping out with the Pacapod Diaper Bag

The crazy side of traveling with kids—Tales from the road