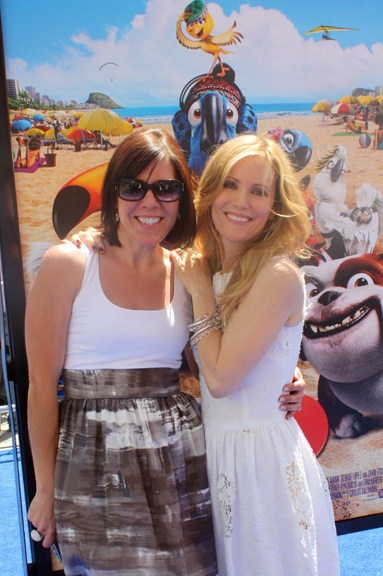 This past Sunday, April 10th I hit the Blue carpet at Grauman’s Chinese Theatrefor the movie premiere of RIO along with some other amazing writers, online magazine editors and mom bloggers.  We got up close and personal to a few of the celebrities (Anne Hathaway and George Lopez) and some we just got to admired from afar.

RIO is the hottest, most colorful and energetic animated film I have seen in a long time.  The music in this film literally had my foot taping and made me want to get up and out of my seat.  The music was created by producer Sergio Mendes and along with some help from the talented Will.i.am and Jamie Fox.  It was upbeat, eclectic and original.  Will.i.am also does the voice over for one of the characters in the film, and has some of the funniest lines in the film, sorry Jamie.  The other stand out voice over was from Tracy Morgan, he does the voice of a tough bulldog wit ha sensitive side, he was actually my favorite character.

The part of the film that made me giggle and feel a bit of a personal connection to, was that Linda (Leslie Mann) and the rare Macaw Blu (Jesse Eisenberg) are from Minnesota (where I am from).  When they set out on their journey to Rio de Janeiro it reminded me a little bit of me when I set out on my own journey to Los Angeles.  I was 21 and didn’t know a single person here, but I knew that there was much more waiting for me and I had to take that leap of faith, much like Linda and Blu do in the film. 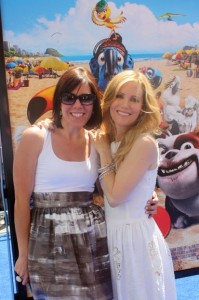 At our roundtable interview with Leslie Mann – I just had to ask if they wanted her to have a Minnesota accent.  to which she replied  “Yes, well I tried it at least!  I researched a little bit in the beginning about the Minnesota accent however, I’m terrible with accents.  And the team said, um, no don’t do  that,  just do your regular accent.”

Leslie Mann chatted with us for about 40 minutes and was so down to earth, beautiful and honest.  She has 2 daughters and is trying to fiqure out motherhood just like the rest of us.

When asked to give some parenting advice she replied “I feel like I’m just learning, it changes from day to day.  Sometimes, I’m just winging it.”

See, even Hollywood Moms don’t have all the answers, they’re just like us!  Well, except I wasn’t wearing a Dolce and Gabbana dress;)

Savvy Sassy Thoughts:  This movie has a great message and story, creative characters, spectacular backdrop and an amazing soundtrack!  Definitely a MUST SEE!

A peek inside the posh children’s suite