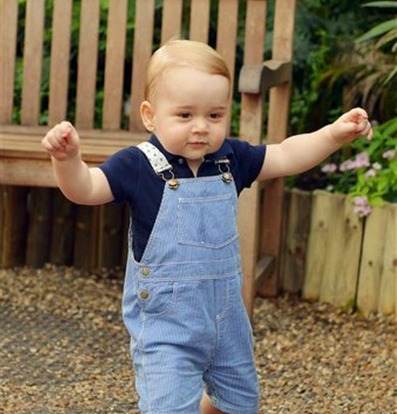 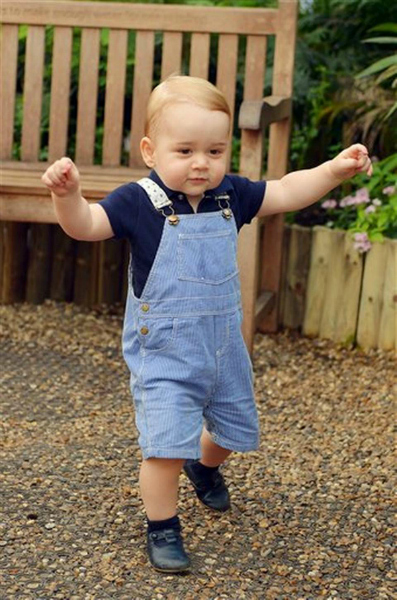 It was a year ago that the entire world seemed to be on “royal baby watch,” anticipating the arrival of the offspring of the beloved Duke and Duchess of Cambridge, Prince William and Kate Middleton. And, eventually he did arrive, on July 22, 2013 — with nearly as much media attention as the royal wedding itself — as the Prince of Cambridge, George Alexander Louis. Since then, we’ve been watching the adorable Prince George grow, devouring glimpses of him when we could and learning how Kate is a regular mum (Royals, they’re just like us, right?).

With the arrival of his first birthday today, Prince George has captured our hearts again with this sweet photograph released by the royal family, showing the Prince walking, unassisted, for the first time to the public. Happy birthday, sweet George! 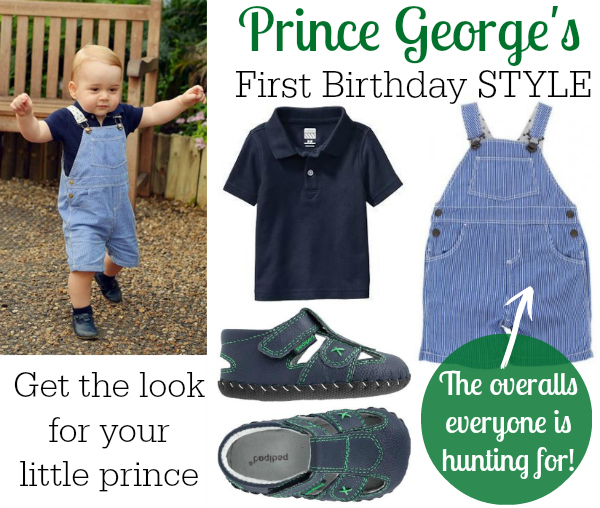 The overalls that Prince George is wearing are obviously being coveted by moms around the world right now. While some sources are claiming they are sold out, we did find an online retailer who has a few pair in stock. The very sweet Petit Bateau Forcing Striped Overalls are actually on sale on Look.com right now for $45. But, if you want a pair, grab them as soon as you can, because they’re not going to last! Some great alternatives include the Petit Bateau Light Denim Overalls ($48, limited quantities) and even Old Navy’s Railroad-Striped Overalls ($17).

Prince George’s little polo-style shirt is simple as can be. In a classic navy, you can easily pick up one at your favorite place to shop for your little guy. Or, it’s likely that he already has one in his closet. We used an Old Navy Uniform Polo ($7) because they are always a steal and fit well. You may want to consider a polo-style onesie to keep it pulled down and smooth under his overalls, like the Ralph Lauren Cotton Layette Bodysuit ($25), which is also monogrammable, a detail that we’re sure the Duke and Duchess would approve of.

For the perfect just-walking shoes, we matched Prince George’s outfit with Pediped’s Original Martin Shoes ($35). These are a bit sportier than the classic British Early Days Alex Pre-Walkers that Prince George appears to be wearing, but they’re also much more practical. To be worn with or without basic navy socks, they do double-duty for any prince, allowing him to cruise in comfort as he’s learning to walk, as well as being stylish. We think the green stitching on the Pedipeds are a nice addition of a pop of color!

What do you think of Prince George’s style?


Having just made the move from big city life to settle down in the town where she and her husband both grew up, Katie Kavulla is a mom of three who strives to slow life down a bit… as impossible as that is with three kids under the age of 10. A blogger turned writer, Katie has spent the past few years combining the things that she loves into a career, with a focus on helping other moms tell their story, because Katie truly believes that every mom has one to tell.

Locals only: Kids’ tees that show your city love