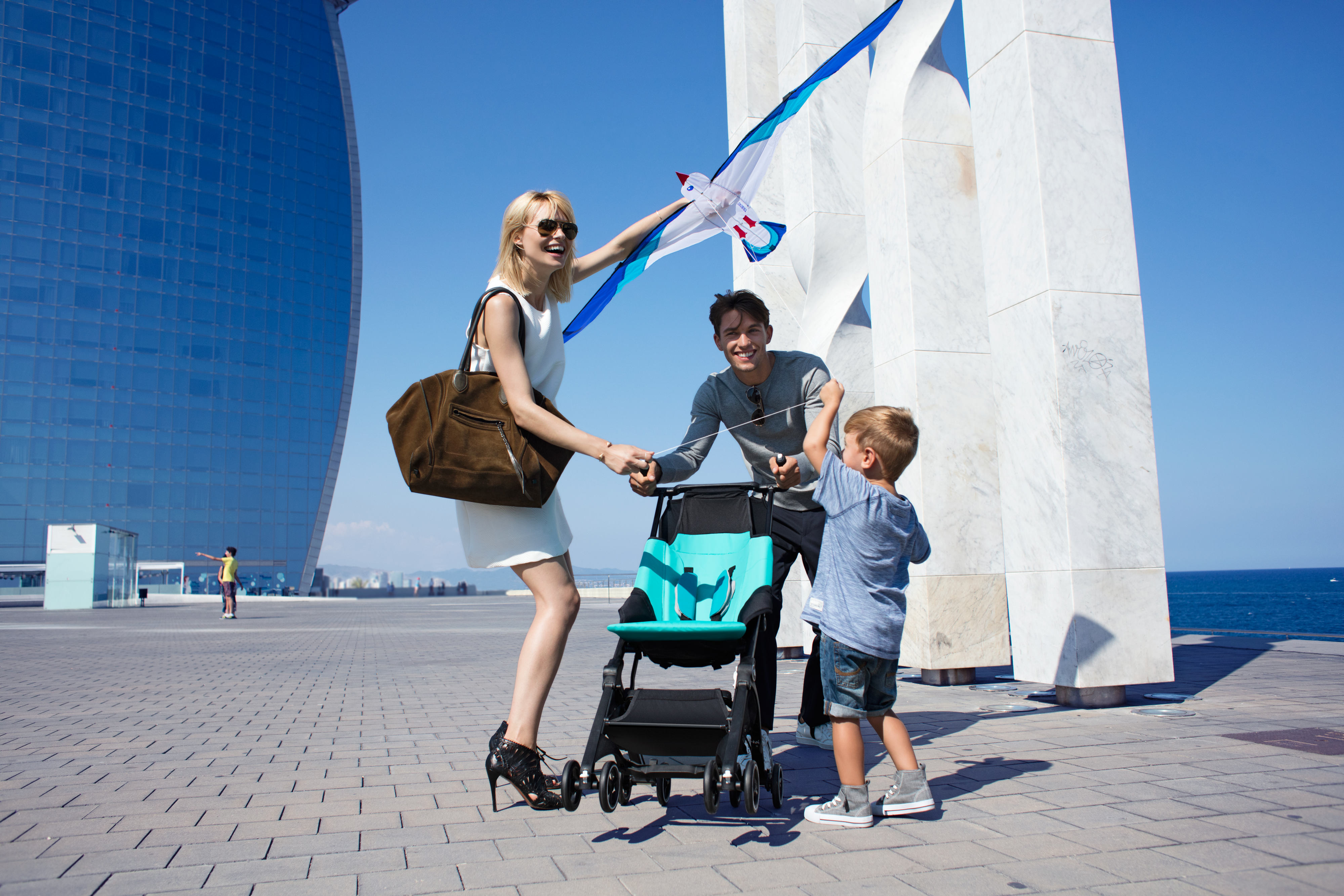 They say good things come in small packages, but when it comes to the gb Child Pockit Stroller, it’s more like really great things come in itty bitty packages. In case you haven’t heard, the gb Child  Pockit Stroller is the mighty mini that took the baby world by storm when it debuted at last fall’s ABC Kids Expo in Las Vegas. For good reason too, as the Pockit’s innovative design packs the biggest punch in the smallest size. 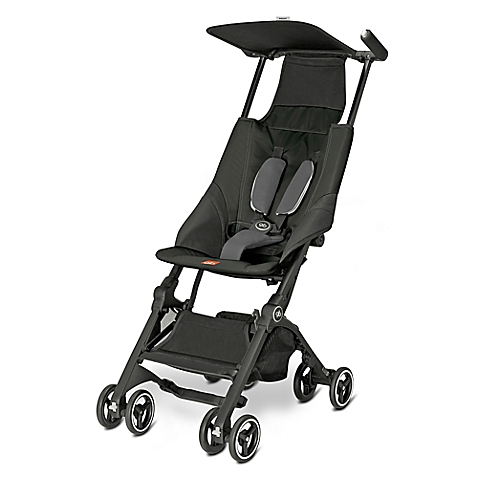 The gb Child Pockit Stroller holds the Guinness World Record for the most compact stroller as of 2014. This full-size umbrella stroller collapses down to a tiny 11.8” x 7” x 12.3” or small enough to fit under the airline seat in front of you or in a good sized tote bag. Yes, it is actually that small. It also weighs a little over 9 pounds, but will accommodate a child from 6-months-old and up to 55 pounds, so in no way are you sacrificing form or function for the small footprint.

I decided to go cold turkey and strictly use the Pockit Stroller as my everyday stroller to see if I could really use something so small as more than just a travel stroller. The answer was yes… and no.

First things first, even the box comes in is impressive — it’s just a small cube with a handle and it’s hard not to wonder if you’re going to be putting together a bunch of tiny pieces all night. However, gb Child has this handled as the Pockit comes fully assembled. Yes, you read that right. You don’t even so much as have to snap on a wheel — it’s all done for you.

I did, unfortunately, have trouble once I actually got it out of the box. As I looked around for instructions, a label, anything, and found none, I was left going “Now what?” and proceeded to violently shake it for a good five minutes before I took to the internet to tell me what I was doing wrong. The initial unfolding of the stroller takes some finesse, but once you’ve got it figured out I can honestly say it’s the easiest setup I’ve ever seen in a stroller. You essentially just hang on to the handles, kick it out and — boom — it’s suddenly there and ready to go. 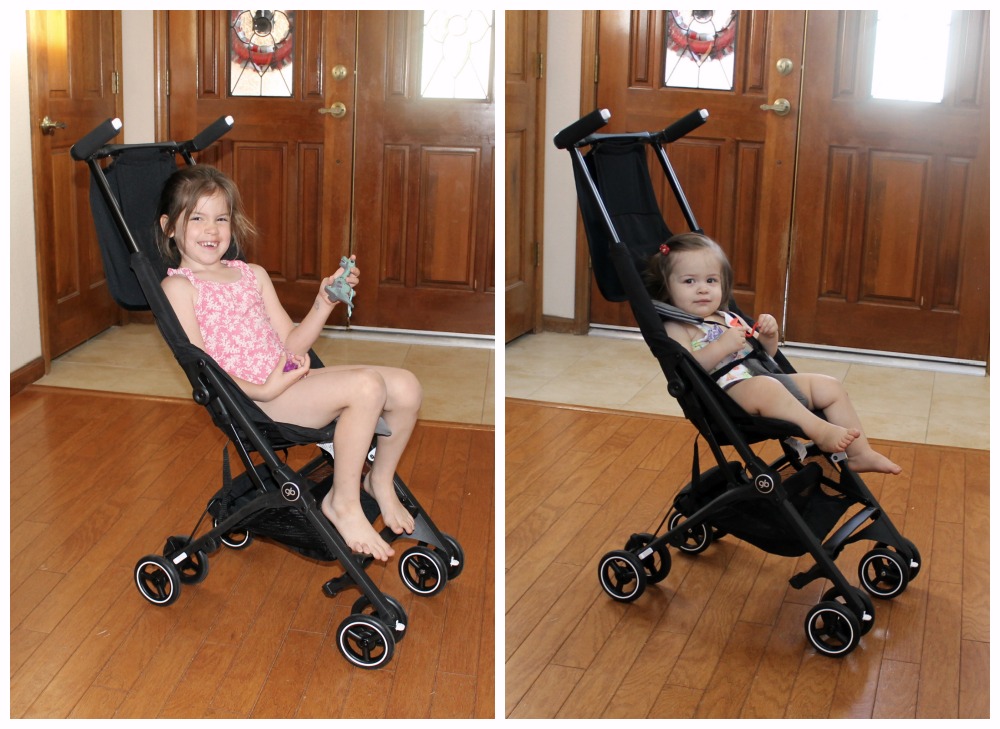 Once we were out and about, I was actually pleasantly surprised at how sturdy it felt with its aluminum frame. Now I’m not going to say it’s heavy-duty or on-par with luxury umbrella strollers, but it doesn’t feel flimsy at all and although not true one-handed-steering capable, I did find it was super easy to maneuver in and out of doors and the handle height was just perfect (for me at 5’4”). If you are on the taller side you might want to test this one out before you buy. The wheels are on the smaller size and they are plastic so it’s not the smoothest ride and probably would not be the best on extremely rough terrain, but the front swivel wheels do lock so you have the option, if need be, as well as a rear-wheel brake. The cargo basket is a good size for how small the stroller is and will hold up to 11 pounds. There is also a height adjustable 5-point harness with padding on the crotch and shoulders and the fabric is wipeable and fully removable for washing.

Now, lets talk about the uber impressive fold, because that’s really the star of the show here. There are actually two ways to fold this stroller: small and smaller. The difference is whether you tuck in the rear wheels or not. I found, for the most part, I left the rear wheels down because it’s easier to fold that way, but it’s nice to have the option. The actual folding process takes two steps and a little bit of practice, because there seems to be an art to it but again, once you’ve mastered it it’s pretty great.

With the small size comes some things you’re going to sacrifice, but remember this is mostly marketed for travel and when you’re traveling you can just about deal with anything. First off, no cup holder or snack tray or caddy of any sort. Second, there is no recline on this stroller at all, which is a bummer, but not unheard of in the umbrella stroller category. And lastly, the shade that flips over to cover your child is really, really small, unfortunately.

If you’re an urban mom who’s in and out of public transportation, or the jet setter who is constantly traveling with your children, then this will be a great go-to stroller for your kiddo. But, if you’re more suburban with room to spare in the trunk of your car, or the type to want bells and whistles when it comes to your travel stroller, then the Pockit probably won’t be your first choice. However, as far as the super compact travel stroller market goes, this one is relatively low on the price point scale and is a great quality stroller so even if you use it just for those trips now and then, you will definitely get your moneys worth with the gb Child Pockit.

Visit our #SummerScoop4Moms giveaway to find our Pockit Stroller giveaway, along with over $2000 of other prizes!


A SoCal girl transplanted to the Arizona desert, Nicole Yontz is the go-to girl for all things gear. She shares her home with her handsome husband, their two daughters (Audrey & Abbey), two dogs, one fish, and countless dust bunnies. When she’s not busy testing out the latest and greatest in gear on her darling little guinea pigs, you will often find her getting a pedicure as she does every single week. Because there’s no law that says you can’t.

Cruise the town with the Joovy Groove Ultralight