I have been on Twitter since May of 2008 and I have tweeted over 23,000 tweets (not sure if I should be proud, embarrased or ashamed!?)  Some of you may just be getting on Twitter, so congratulations! While you’re at it, there is this other new thing called Pinterest, you might as well just jump on that bandwagon too.  Go ahead take the plunge – get social media soaked!

I have built a business on leveraging social media and I get asked a lot of questions, so I thought maybe I should just write some of this stuff down.  These are not wikipedia or google definitions and this is not the only way to do it – but it is the savvy sassy way.

Hashtags #:  There are hashtags for a variety of topics and for many reasons.  There are ongoing hashtags that you can search to find people that are talking about a topic you might be interested in or a certain trending topic, news story or even your favorite tv show. Examples:  #breastfeeding, #savvyblogging, #travel, #fashion #kids #grammys #oscars and even hashtags just for fun like the popular #justsayin for when you have a random thought.

Hashtags for twitter parties are usually temporary unless it is a reoccurring party that happens weekly or monthly.  Die hard fans of popular tv shows will use hashtags during the show to comment about the show or talk smack;)  the #bachelor hashtag is a perfect example.  Real life events will also have hashtags so that everyone attending that event, party or conference can communicate and share details or important information for that event.

Why are hashtags important?

They allow you to sort or clear your twitter stream so you will only see those tweets that are relavant to that conversation or topic. Another reason hashtags are important are so brands and companies can track the conversation and see the statistics of that hashtag.

There are a few tools to track social media reach and hashtags.  Three common ones are TweetReach, Social Report and Hashtracking.

You join a twitter party by simply searching the #hashtag in the twitter search box and follow what is being said and tweeted with that hashtag.  You can join the conversation by just simply using that #hashtag in your tweet.   These are public, so just jump in, reply to someone, click on articles or blog posts that relate to the party’s topic or just read and observe what is being said.

Twitter Party Tools:  Tweedgrid, Hootsuite, Tweetdeck and Tweetchat.  The tool I use for all my twitter parties is TweetGrid.  It will divide your twitter stream into 3 neat columns so you don’t miss a thing during the party.  Simply go to TweetGrid.com – click PARTY and  then this form will appear and you just fill in the blanks! 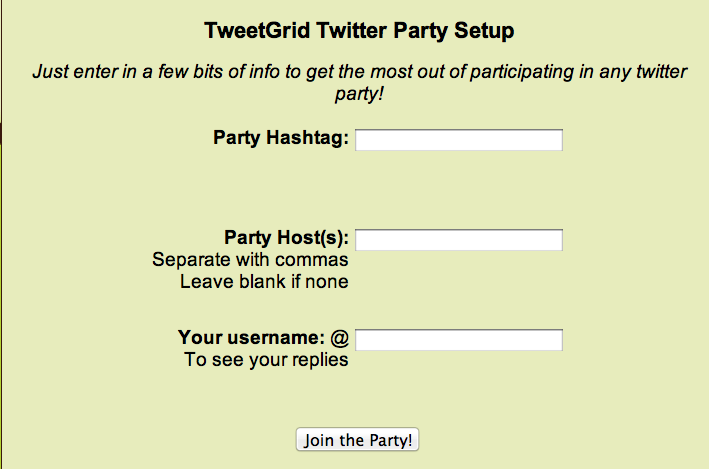 *The hashtag will automatically be attached to all your tweets so you do not have to keep re-typing it. 🙂

After you login / autorize the twitter app, you will see 3 columns:

Left Column:  Tweets from anyone using the party #hashtag
Center Column: Are the Tweets from the twitter party host/hostess
Right Column:  Is anyone that replies directly to @you

Sponsors:  Yes, twitter parties and chats can be sponsored, but do not let that deter you from joining.  Sponsors want to engage and join a conversation typically that is in aligned with their brand.  Twitter parties are a perfect way to interact with products, brands and services, they should add to the party not control it.

Prizing:
During the twitter party there may be prizes to win!  You can win by simply participating  or answering certain questions attached to prizing.  The host usually begins the tweets associated with the prizes with Q1, Q2, Q3 etc… and the winners are drawn randomly.

RSVP:  Some twitter parties require an RSVP and all you need to do is link up your twitter handle.  I use Simply-linked.com for all my twitter parties.

Example:
Link Title:  Is your twitter handle @savvysassymoms
E-mail:  Will not be displayed or distributed
URL:  http://twitter.com/savvysassymoms 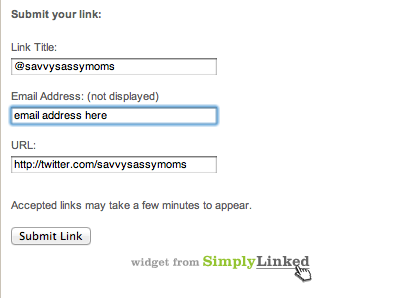 Now you are ready to Party!

Geek Meets Chic: Get those pictures off your phone!