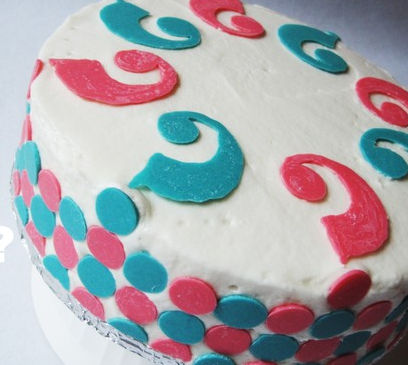 Okay, before I reveal to you the topic of this post I want you to suspend all notions you have of traditional baby showers.  That’s right, forget about pastel color patterns, theme related party favors, ‘women only’ events and everything else that you know about baby showers.  As a matter of fact, I want to take it a step further…. I want you to completely remove the term “baby shower” from your vocabulary for a while. Instead, I’d like to replace it with “Gender Reveal Party.”

You might be thinking to yourself “huh… what in the world is that?!?!” Well, it’s only the hottest trend for expecting moms and baby shower hosts!  Expecting moms everywhere are opting for this unique and intriguing style of party and it’s easy to see why. It’s cost-efficient, easy to decorate, simple to set up and uber exciting!

All you really need to pull off this spectacular party are some accomplices, CIA level secrecy and a cake.  So how does it all work? First the mom-to-be has the ultrasound technician/doctor keep the gender of her baby a secret and write the gender down and seal it in an envelope.  She then gives the envelope to her baby shower host or sends the secret info to her baker. The baker then bakes a cake according to the results. If it’s a boy then the baker bakes a blue cake and if it’s a girl, a pink cake.

Obviously, the entire cake is covered in a neutral-colored frosting to keep the gender of the baby away from prying eyes.  Towards the end of the gender reveal party the expecting couple has everyone gather around their mystery cake. On the count of three the couple cuts into the cake revealing their baby’s gender!

Now this is a formula for a great time. Imagine all the suspense and excitement built up around a cake as everybody in the room anxiously awaits what is about to be revealed.  This isn’t the only way to go about it either. Many a’ baby shower host have gotten mighty creative on how exactly the gender of the baby is revealed. Ideas range from personal mystery cupcakes filled with pink or blue custard to pink or blue balloon release events.  Each idea is designed to let everyone ‘know’ in dramatic fashion what the expecting couple is having!

Those are the broad strokes concerning gender reveal parties. Now, let’s get into some finer points that really makes this type of event not only fabulous but easy to set up. As you all know, your traditional baby shower has been for the most part an exclusively ‘women only’ event.  Not so with the reveal party. These coed baby showers do away with classic pastel colors in favor for cleaner color palettes. Creating an environment appealing to both sexes and at the same time, fostering that “gender-neutral” atmosphere.  There is also less emphasis on decorations and more focus on the anticipation and the hype built around the concept of the party.

It’s funny that no one thought of this idea sooner, wouldn’t you agree? That being said, if you are an expecting mom in the midst of planning a baby shower or you’ve been asked to be a baby shower host then I highly recommend you turn your baby shower into a gender reveal party!