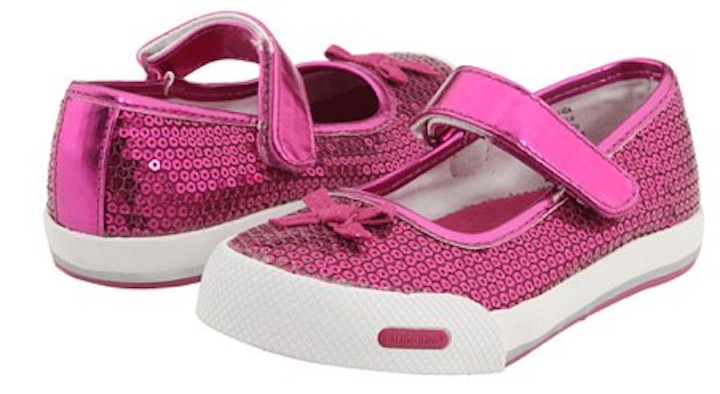 My son who is 5 came home from kindergarten today upset because another child picked on him for what he was wearing. I feel like it’s my fault – I let him pick out his special first day of school outfit and he chose his sister’s old sparkly pink shoes. He wouldn’t leave the house without them on, so I gave up and let him wear them. He seemed happy so I let him wear them all week. But now what do I do? Was I wrong to let him wear his sister’s shoes to school?

You were NOT wrong. In fact, I applaud your choice, even if you did it because you were sick of arguing with your son on the way out the door to his first day of school. You’ve done a fine job getting this little boy to age 5 without feeling societal influences about what is “okay” for boys or girls. Your child obviously has a savvy sassy sense of style and that should be celebrated. If I was in your shoes I would let the kid wear a tutu and a cowgirl hat if that’s what makes him comfortable.

Leave it to other kids to rain on your parade, though, right? That’s the problem with things like school and the outside world. We can’t safely let our kids fly their individual freak flags without risking having some little jerk being obnoxious about it.

If I was in your shoes I would let the kid wear a tutu and a cowgirl hat if that’s what makes him comfortable.

Maybe it’s good that this happened to him now, though. Since you have an older kid I assume you’ve met first graders. That is when they really start to turn. First grade always includes at least one kid who isn’t afraid to say exactly what is on his or her mind to other children OR adults, whether or not it is disrespectful or mean. Since teasing is inevitable anyway, here’s your chance teach your boy how to respond to being teased for something that he loves, way earlier than you were expecting to.

It’s hard to see him come home deflated, but you don’t want this incident to be the first in a long line of other kids stepping all over his creativity. You have to establish right now that your son was not wrong for wearing pink shoes – it was the other kid who was wrong for teasing. Talk with your son to come up with a strong response if anyone at school ever makes fun of him again – for any reason. Think about what you would say and help him find his own words. “I like these shoes! They are awesome,” he might answer, adding “and teasing is mean.” Practice with him. If he wants to, he should feel confident enough to head to back school with pink sparkly shoes on his feet and a snappy answer ready for that mean kid.

Moving past this incident will help your son develop a strong sense of his own character and knowledge of how to treat people properly. And since it’s still only Kindergarten, he’ll have a head start at dealing with being teased. He might even serve as a good example to his classmates of a child who is not afraid to embrace his unique style.

Send in your parenting question, relationship dilemma, or your snafu with social etiquette. Sassy is here to help! Submit your question for Ask Sassy! here.

Ask Sassy: Should I Ask For Donations Instead of Gifts For My Kid’s Birthday Party?

Child Style – Lucky Kid is Back!