We were visiting my family in Minnesota about a week ago and during the trip we planned on taking the kids to my Dad’s cabin on the lake. I was very excited to take my kids “Up North”, to the place where I had such great memories as a kid. I wanted my kids to be able to have the same kind of experience and enjoy spending time with their grandpa.   We had our Life Jackets, Fishing Poles, Worms, a Sunny Day and a Camera to capture it all!  Everyone was ready to go!

Of course, my brother caught the first fish. But not to be outdone, my daughter McKenna caught one right after…and then it never stopped!  She kept pulling them up out of the water, one right after another!  The 4 year old *Queen of the Boat*ended up catching ELEVEN fish. Yep, 11! (With a little help from Mom along the way, of course)  My husband and son caught 4. McKenna was thrilled to be the *WINNER* of the day (a little competitive, that one) After all of our catches we released the fish back into the water, mostly unharmed. This made the kids very happy to see their little *friends* swim away.

While all this was going on I was snapping pictures like I was the head photographer of VOGUE or something but I really wanted to capture this *picture perfect* day and all the fun we were having! I had so many great pictures that I decided I would make an album for my dad to always have up at the cabin to remember that day!  I couldn’t wait to put it together when we got home!

We left the cabin and went back down to the city. As I was unpacking… I realized that the CAMERA was missing. I looked everywhere,  beach bags, backpacks, suitcases, my purse, my pockets,and my husbands pockets! Nothing.  I called my Dad and had him search the boat and the cabin, he looked for almost an hour.  Still Nothing.  All those pictures!  Where could it possibly have gone.  Then I remembered. I gave Hudson the camera to take a couple of pictures. Although, I thought I took it back from him…I was almost sure of it. (though, I did have a couple beers on the boat, so my precise recollection could be a bit..uh, fuzzy)  Now that we had a “person of interest” it was time to question the subject.

“Hudson, do you know where Mommy’s camera is?” “Yeah, in the water.”

The shock. The awe. I’m sure my face must have been fire engine red because the fire on the inside had started burning hot. I was speechless, and a little sick to my stomach.  The questioning went on for some time. But this kid was hip to all our attempts to “trick” him into saying something different.  Savvy indeed. The boy is pretty with it for 2 ½.  My husband asked him if he put his trucks in the water, just to see if he would admit to something that didn’t happen. Nope, just the camera.  I guess he realized that the camera wasn’t going to swim like the fishies.

I was beyond upset. Tears filled my eyes. We had just had such a great trip and my Dad never gets a lot of opportunities to see his grandkids, and now all those pictures were at the bottom of the lake. Not to mention the $300 digital camera. I excused myself so as not to have a total meltdown and went in the other room. I really wanted to make a great gift for my Dad.  I was SO mad. (Even though it’s pretty hard to be angry at an adorable 2 ½ year old…I gave it my best shot)

So here is a picture of my kids fishing! 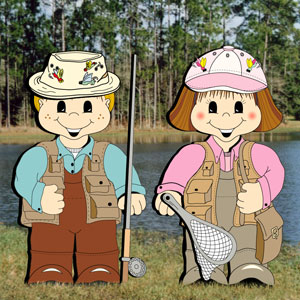 Never give a 2 ½ year old the camera, especially on a BOAT!

(Unlike the fish our son is still a *keeper*, but really!)