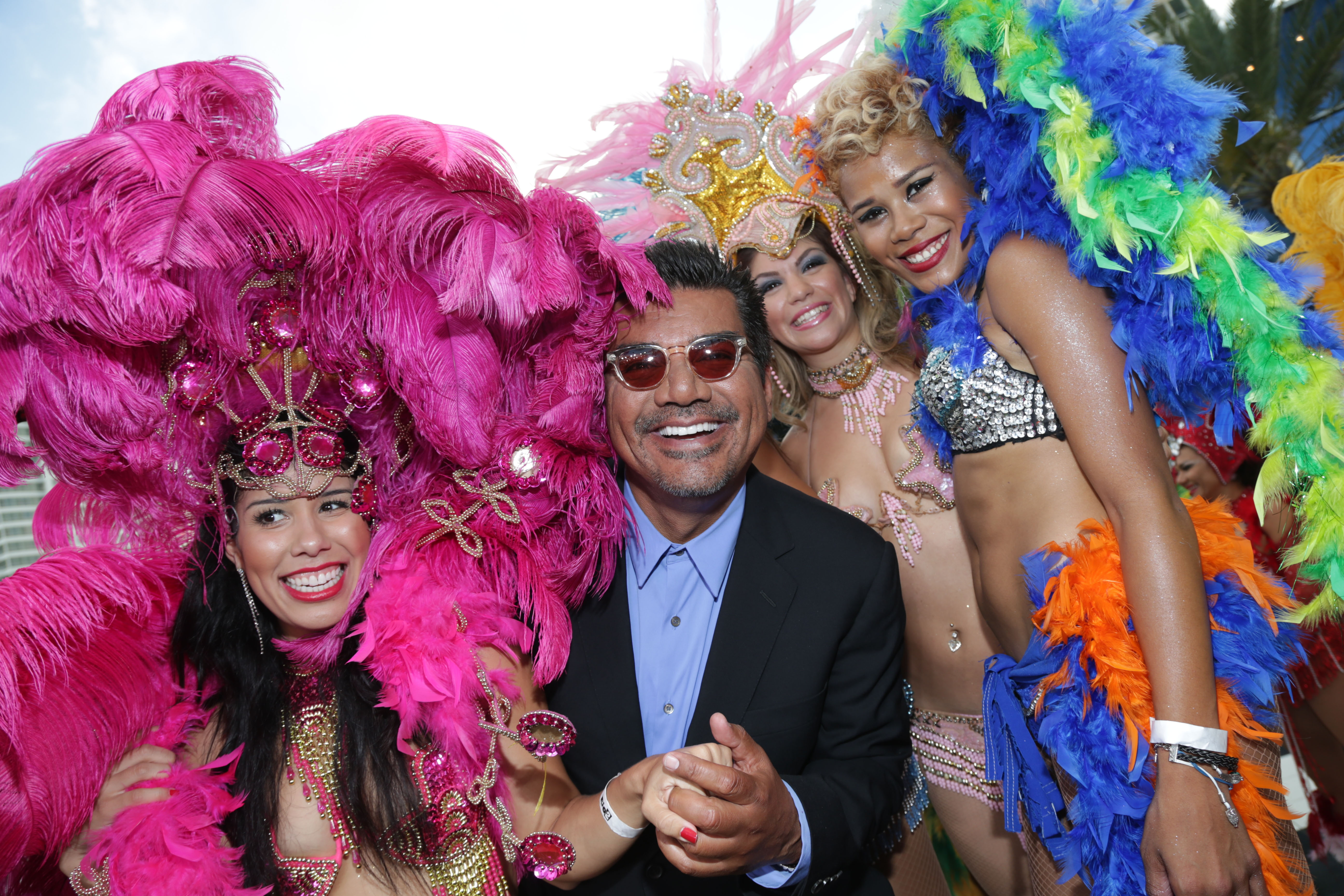 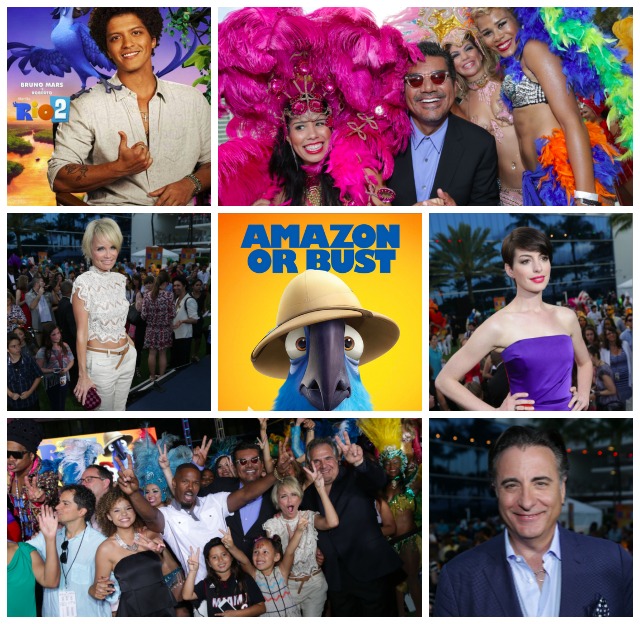 Blu and Jewel are back for an all new adventure in Rio 2!

RIO 2 hits theaters tomorrow and there are plenty of reasons to take the kids and go see it!  I had the pleasure of attending the RIO 2 Press Event in Miami to celebrate the release of the film, and I had a blast. I also saw the film so I could give you the full scoop.  So let me break it down.

The family of rare Macaws set off on a family adventure!  See, celebrity birds – they’re just like us! They take a summer vacation too. They head out of the bustling city to get back to their roots, which happens to be the Amazon!

The Music Will Move You

Just like the first RIO movie, the music in this film will make you want to get up and dance. The musical talent in this film is jaw dropping. You will love the new song “What is Love” by Janelle Monáe. The entire soundtrack is full of colorful beats and once again makes this film so exciting and fun.

Who doesn’t love Bruno Mars?  Let’s just say his character fits him perfectly.  A handsome songbird that will make all the girls swoon.

This movie is a perfect set up to talk to your kids about a different country, culture and the animals of the Amazon.  Movies can be a great catalyst to ope nup a conversation with your kids about a new place and explore.  Do some research and find some interesting facts to share with them.

Kristin Chenoweth plays a spunky and poisonous dart frog, need I say more. Her character may be small but her attitude and voice is the biggest of them all.  She’s a woman that knows what she wants and won’t stop until she gets it.  We like sassy women like that.

This movie brings up a very modern parenthood senario, getting the kids off the ipads.  Do you remember what your kids face looks like, or do you only see the top of their head?  We moved our kids to Costa Rica and we still have this problem, but finding time as a family to unplug and disconnect is so important.  Get outside and leave the electronics at home.

The Fanny Pack is Back!

Jessie Eisenberg is the voice of Blu and is now a Dad traveling with his family in the jungles of the Amazon.  Remember, he is originally a bird that was kept in a cage in Minnesota, so he’s a litle bit of a nervous nelly.  He brings a fanny pack on the adventure and well, let’s just say this film might launch a fanny pack comeback.

For more on the fanny pack comeback and what Jessie Eisenbeg has to say about it, check out Tech Savvy Mama’s 4 Must have travel-savvy bags inspired by Blu’s love of the fanny pack. 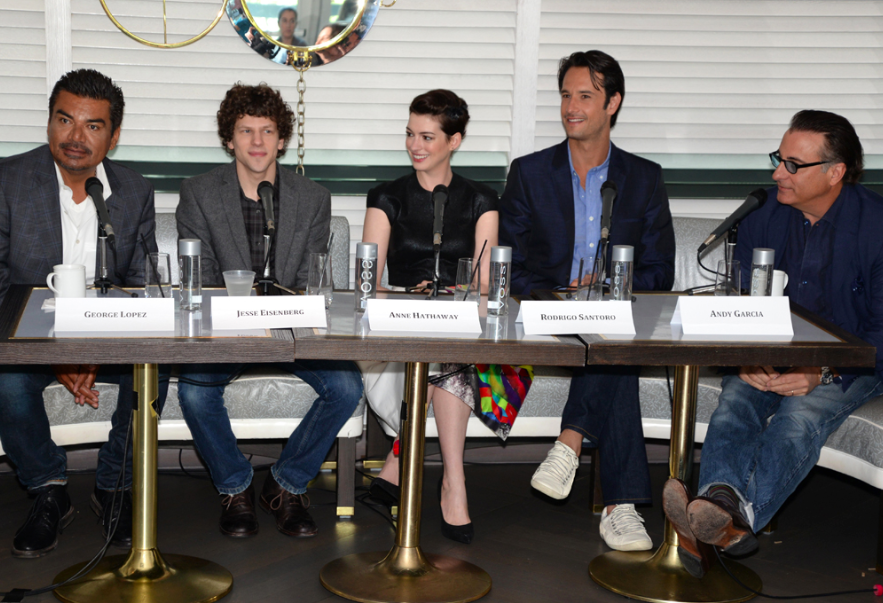 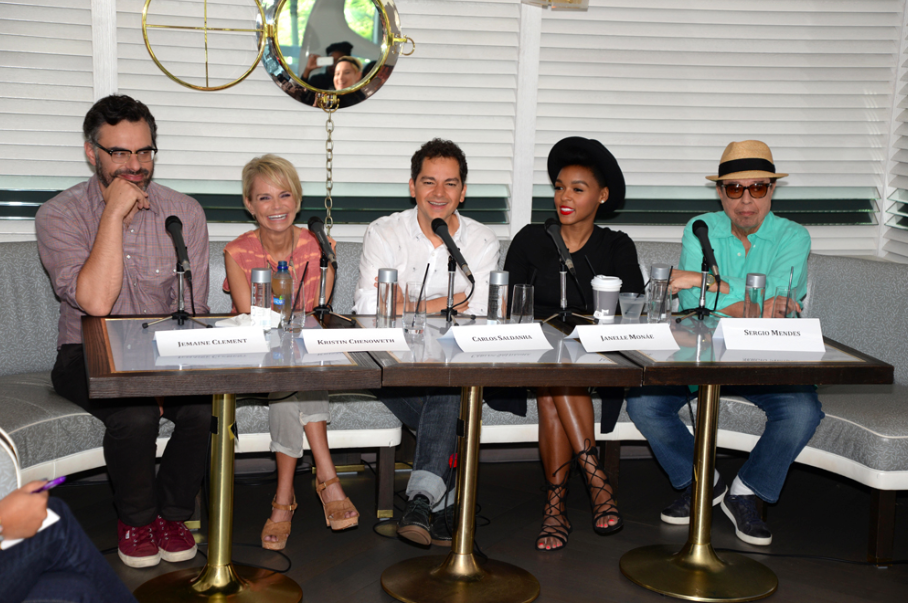 We got to sit down with the cast and director of RIO 2 and I loved what the Director, Carlos Saldanha said about traveling with his kids and teaching them about new places.

“Well, I just try to make it seem like natural and fun. What sometimes the movie does is just gives you a little bit of curiosity of new places. It takes the kids to a And I think that’s what I try to tell my kids, we are going to this very special place. Regardless of where you go, it’s going to be something fun and different for you.

We always like to try to play games and things that, just to make sure that they learn a little bit about it. When we go to places that have interesting sights or interesting cultural things to do, we try to play a game, like you get an extra dessert if you can tell me three of the three of the main paintings of the Louvre. And they go like, “Okay, I want to know.” So, sometimes you have to do a little bribery just to get there, but it works.”

Savvy Sassy says, RIO 2 is a family film not to miss!